Our long day began in Berlin and ended in Prague. As we reflect on our morning spent at the Otto Weidt hidden workshop for the blind, we remember the courage of this man whose brush factory was located in the heart of Berlin. He not only hired blind workers, but also hired Jews and hid them in a tiny back room of the factory behind a wardrobe cabinet.

From there we walked to the Rosenstrasse Memorial, an incredibly meaningful series of carved stones depicting heart-wrenching scenes of wives, husbands and their children. These images represent the courage of the Christian women of Berlin

whose Jewish husbands and children were arrested by the Nazis to be deported. Because of their public protests on Rosenstrasse in front of the holding cells, the Nazis released these Jewish men and children and most of them lived through the war working at forced labor for the Nazis. 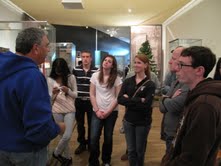 We studied the intriguing history of the Jews at the Jewish Museum, designed by American architect Daniel Libeskind. The tour included an impression of the meaning behind the architectural structure of the museum, as well as an informative lecture by Shalmi Barmore on the history of the Jews in Berlin.

After a quick bus ride and hurried lunch, we boarded the train for the 5 hour trip to Prague, and are eagerly anticipating tomorrow morning touring the Jewish Quarter here.