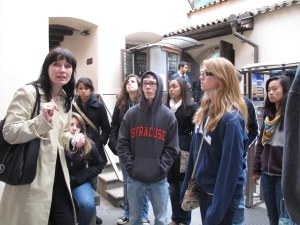 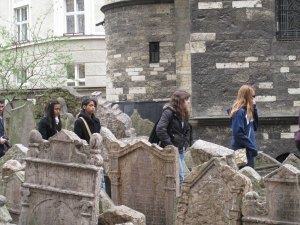 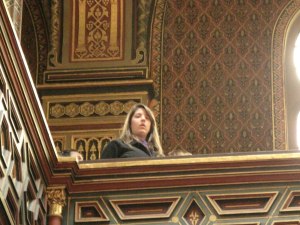 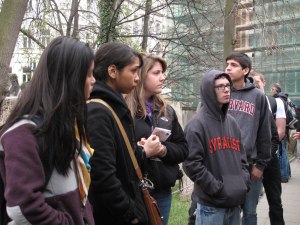 We spent most of our day in the Jewish Quarter of Prague today learning the history of this beautiful city, and especially the history of the Jews here. Shalmi and our Czech guide, Kamilla, educated us on the kingdom of Bohemia, which was ruled by the Holy Roman Empire Charles IV. Because of his desire to turn Prague into a capital fitting an empire, Charles utilized the Jews to finance the building of institutions like Charles University and the Charles Bridge. Another paradox presents itself: The Jews live in Prague, yet they simultaneously live completely on their own, enclosed in the world of the ghetto next to the central market square.

We toured four synagogues, including the Old New Synagogue, which was led by Rabbi Loew, creator of the legendary Golem. In the Maisel Synagogue, Shalmi told us that during the Holocaust, curators of the Jewish Museum of Prague asked the Nazis if they could collect the religious objects that the Jews would have to leave behind when transported to the camps. Surprisingly, the Nazis allowed this, and to this day, there are thousands of religious objects in rows and rows above the ceiling of the Maisel Synagogue, catalogued meticulously by curators who assumed that one day they would be returned to their rightful owners.

From here, we silently walked through the Pinkas Synagogue, which bears a memorial to the 80,000 Jews of Prague and nearby towns who were victims of the Holocaust. Each person’s name, date of birth and date of death is painted by hand on the interior walls of this synagogue and listed by the town they were from. The silence is deafening as one walks through the rooms of the synagogue and thinks about the people who were killed by the Nazis. Just outside is the old Jewish Cemetary, where we walked and learned about the several layers of people who were buried here due to the limited space permitted by the king. The last synagogue we visited was the Spanish Synagogue, with absolutely beautiful painted walls and ceilings done in an incredibly ornate, Moorish style.

Kayla writes:
Today I connected the life of the Jewish people in both Prague and Berlin by comparing the synagogues we visited in both locations. In each society, the elaborate synagogues made the most wealthy Jews more visible, but didn’t represent the economic level of most Jews. Their affluence was reflected in their synagogues and personal property. Each synagogue, specifically the Maisel, the Spanish and the New Synagogue in Berlin, was elaborately decorated and designed. The Maisel Synagogue contains thousands of Jewish possessions which are either gold, silver, or decorated with gems. During the Nazi era these possessions were collected, catalogued and stored, but never returned to the Jewish owners.

**Please note, previously we posted the summary separately and then posted student reactions as comments.  Our posts will now include a summary of the day and student reactions.  We will leave the comment section open for anyone outside the tour who wishes to comment.