Pavel Stransky, Holocaust survivor from Prague, met us for breakfast at the hotel before telling us his story of surviving both Theresiens 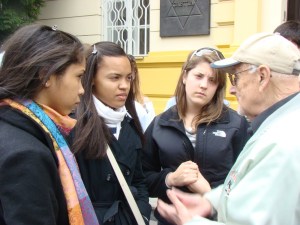 tadt and Auschwitz. After answering our questions, Pavel rode with us on the bus to Theresienstadt. On the way, Shalmi pointed out the curve in the highway where Reinhard Heydrich was killed. This story and the history of the area helped us to understand the town and fortress of Theresienstadt.

In this residential area which is still an active community and town, we entered a building which was once a barrack which is now a museum. We were introduced to the children’s drawings which depicted daily life in the ghetto. This artwork again brought to the forefront the paradox that existed during the Holocaust.

He accompanied us from there to the Danish Synagogue, a hidden synagogue in the Danish area of the ghetto, which was just discovered a few years ago by a local resident.

From there we went to the what is known as the Magdeburg barracks, where the work of artists, composers and musicians is displayed.

These works were created during the final days of life before being deported to the East, Shalmi points out the irony of this situation: the legacy that these people leave behind is in the very cultural concept that the Nazis wanted to push the Jews out of….they are gone but this is still here; they chose to leave a legacy that they were part of culture, despite Nazi ideology that Jews were cultural viruses.

After walking through the tunnels of the fortress of the prison camp at Theresienstadt, and talking about the swimming pool which was used by the Nazi staff to entertain themselves by humiliating the inmates with diverse acts of sadism, as if camp routine was not enough, we boarded the bus to go to Lidice. This once was a very peaceful Czech village. The Nazis suspected Heydrich’s assailants came from there. In retribution, they killed all the men of the village, sent all the women to concentration camps, and some of the children were sent to live in Germany to become “aryanized,” or adopted, by German families. The remainder of the children were sent to concentration camps and killed. We walked across the green hillside to the memorial, sculpted in brass using actual pictures of the children of Lidice. The children’s faces stare blankly into the distance, as if anticipating and fearing their futures. An eery

silence came over the group as we stood before these children, trying to comprehend the question, “How it was possible for human beings to be so cruel?”
On the bus ride back to Prague, Pavel left us with these words: “One can never win over human stupidity, but one must never stop fighting it.” 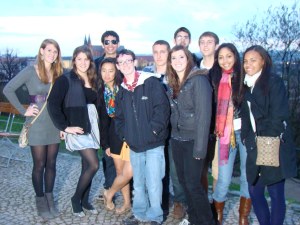 Becca says:
In anticipation, I woke up looking forward to meeting Pavel Stransky, an 89 year old Holocaust survivor. When Pavel told us his story of how he survived the Holocaust, I could not help but anticipate the suspense he made me feel wanting to know what happened next. In my opinion, I think Pavel is some kind of gift from God. Not only did he survive in the end, but he explained that there were many times he could have been the one sent to the gas chambers. Fortunately, Pavel kept getting saved. Some people could say he was lucky, but I feel Pavel was saved for a specific reason. It only makes sense to me that he was saved because of his intellect and loving heart. I was very impressed that Pavel is so happy and did not seem to have any regrets. He kept referring back to his wife, Vera. It was easy to tell he was madly in love with her by his facial expressions. When he got home he wondered if his wife was alive, and then he discovered she was at the hospital. This curiousity of her existence is what kept him alive. In conclusion, Pavel really caught my attention, and learning about what he had to go through really gave me a different view on life. I can’t explain exactly because you can’t get the same feeling if you have not met him. He basically taught me to appreciate every moment and everyone you love, because you could lose them at any given time.
Nick says:
After hearing Pavel Stransky’s survival story, I was blown away. He referred to the genocide as not one Holocaust, but 6 million individual ones. Needless to say, Pavel overcame an immense amount of obstacles which no one could truly comprehend unless he or she lived as a Jew in the mid 20th century. Through the elaborate description Pavel included in his story, we were able to get a small sense of what each victim went through during the Holocaust. Looking into his eyes, one could see the desperation and years of suffering he faced in his life. In 1939, Pavel lost his father, who commited suicide, and only three years later was separated from his mother, whom he never saw again. He met the love of his life at the age of 17, and eventually married her, spending their “honeymoon” on a train to Birkenau. After miraculously making it out alive, he was sent to Auschwitz where he was told “Look into the horizon, the only way out is through the smoke in the chimneys.” Again, he made it out alive and was returned to Theresienstadt. Once the war ended he re-entered society. I was amazed by everything he went through, and everything he said will stick with me for the rest of my life.