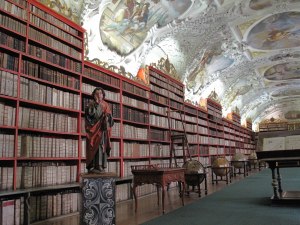 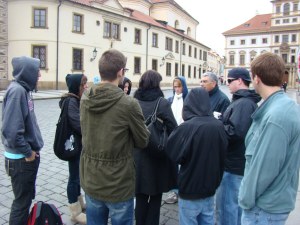 Our day began at the Strahov monastery, manned by friars who came to Prague in the 12th century from France, after they had returned from the Holy Lands, and sold their services as guards, bibliophiles (librarians) and book copiers/scribes. In the two fascinating halls of their library, one for the theological works, and the other

for philosophical works, we saw an excellent example of how these church institutions were the depository and guardians of culture in Europe. This library contains over 45, 000 volumes of work dating back to the 10th century.

From our view at the top o 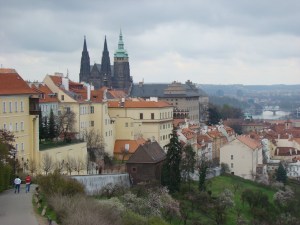 f the hill, we overlooked the spectacular view of Prague, and discussed its different units: The Castle Town, Lesser Town, New Town, and the Old Town which includes the Jewish Ghetto. All of these were in place by the 14th century, when Charles IV was the Holy Roman Emperor and Prague was the capital of the Holy Roman Empire. Next, we saw the Czernin Palace, which today houses the Foreign Ministry, and the Loretto Shrine, one of the finest baroque structures.

A former student of Mrs. Tambuscio’s from Midland Park High School, Michael Finnerty, has been in Poland for the past month on business and decided to spend a few days w 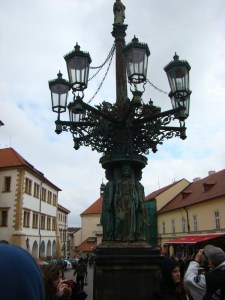 ith us in Prague, reconnecting with his prior Holocaust Sudy Tour experience, Mrs. Tambuscio, Mr. Barmore and now with this year’s group.
Michael recalled the many themes and lessons from this experience and at one point led the group in a discussion about something that he still reflects upon today. While describing an ornate 18th century light post, Mike underscored for us the European insistence on both functio 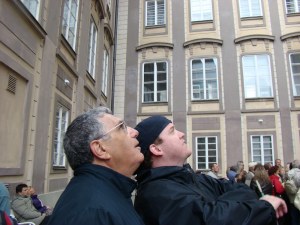 n and form in their culture. This light post in the center of the street, uses gas lights and must be lit every night by hand, and traffic must flow around it. Instead of modernizing, this beautiful structure remains as a necessity for function within beauty.

At the Prague Castle, we watched the changing of the guard, usually accompanied by trumpets. However, today, because of the death of the Polish president and other Polish officia 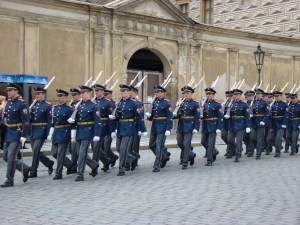 ls in the plane crash, there was silence.

Continuing into the Castle premises, we saw a whole diversity of
architectural styles, beginning at the St. Vitus Cathedral, with its unique
gothic and neo-gothic architecture. As we walked through the king’s palace, Shalmi explained the significance of manure in world history and how defenestration was utilized to punish individuals. We then went into the recently opened Lobkowitz Palace. The Lobkowitz family is one of the most important of Czech nobility whose estate and property were ve 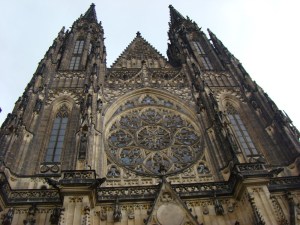 ry, very extensive. They lost their property twice in recent history: once to the Nazis, and once to the Communists. They retrieved it in 1989 after the Velvet Revolution, and recently opened it to the public as a museu 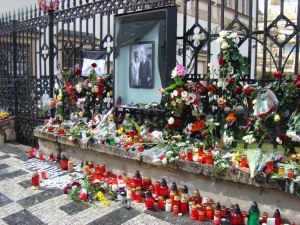 m. Inside we had an intimate look at the inside of palace life, and especially at the Lobkowitz’s contribution to culture: music, painting, and architecture.

After lunch, we walked through the Lesser Town, saw the John Lennon wall,
crossed the Charles Bridge into the Old City of Prague, and saw the
Clementinum, the Jesuit campus. The Jesuits were called in after the 30 Years War to head the spiritual and cultural revolution initiated by the Catholic Church in what was to be the counter reformation. Their main role was in rebuilding education in order to disseminate the principles of the Church. This was the first case of a cultural revolution that caused ambivalent attitudes within Christianity.

What impressed me most today was our time in the Strahov Library. The books and artifacts that existed in this library represented the “hands-on” learning that took place centuries ago. The library contained books, diagrams, models, and sketches that cataloged all forms of life. The monks who facilitated the library provided experiences that allowed for a multi-sensory learning opportunity. As I walked through the library I felt the connection of my learning on this trip to how learning was experienced as far back as the 10th century. I felt a sense of awe in the opportunity I was given to walk through the past, making a direct connection to the present.

The St. Vitus Cathedral was a complete eye opener when I walked through the archway. I stood in awe as I approached this enormous, extravagant, and architecturally beautiful structure. As my eyes scanned the scope of the huge church, I wondered how long it could have taken to build such a place, as well as how the design contributes to Bohemian culture. Gargoyles were a prominent feature on the church and they were planned to guard the structure from the rain. As an aspiring architect myself, I was intrigued and inspired by the massive scale of this structure that was built so long ago. I wondered, where the materials and resources came from during the middle ages. I walked away reaffirming my desire to become an architect while admiring the beauty of an age long passed.