Our day began with a rainy drive to Auschwitz at 6:30 a.m. Our Polish guide, Eva, framed the current sorrow of Poland by speaking of the state funeral for the Polish President and his wife that will be held here in Krakow on Sunday. Eva’s historical framework then led to Shalmi’s introduction of Auschwitz as another planet, a term coined by a survivor describing the camp while testifying at the Eichmann trial. Auschwitz, a camp surrounded by civilization: homes, businesses, factories, churches, all signs of human life, not alien life. How then was it possible for a man like Rudolf Hoess, commandant of Auschwitz, a bureaucrat and true believer in Nazi ideology, to work his 9 – 5 day, then go to his villa, spend the evening with his wife and five children, and listen to Beethoven, Mozart and Wagner? Here, where Hoess and the Nazis killed 1.5 million Jews and other victims. 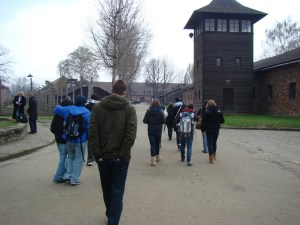 Inside Auschwitz I, originally a camp for Polish political dissidents, now a museum, a trained guide led us through the prison blocks, each of which now houses the common, everyday belongings of human beings who suffered here. What is left behind from the piles of suitcases are personal items: toothbrushes, eyeglasses, hairbrushes, clothing and shoes. From our studies, we know that before being deported, these helpless people were given little time to pack for whatever journey lay ahead. These items, including the sandals with the red, white and blue braided straps, show that the people coming here had no idea what fate awaited them. 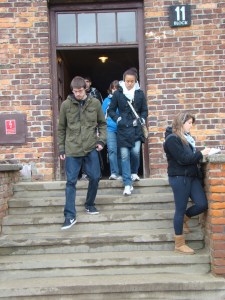 Our guide led us through the prison block with two standing cells, in which four prisoners would have to stand in a three by three foot square throughout the night, and then go to work each day. Also in this block was the starvation cell of Maximillian Kolbe, a Polish priest who volunteered for this punishment in place of a man with a family. Through his actions, he saved the man’s life. Kolbe survived the two weeks of starvation, but then was given a lethal injection and killed.

We then proceeded to the crematorium, beside the gallows where Rudolf Hoess was executed in 1947. While gazing at the

gallows, we could see the villa of Hoess to our right, a picturesque scene like something out of a movie, and to our right, we could see the building housing a hospital and canteen for the SS officers. Once again bringing to mind the perplexing question of the identity of these men who worked here and committed these acts, and how was this humanly possible. 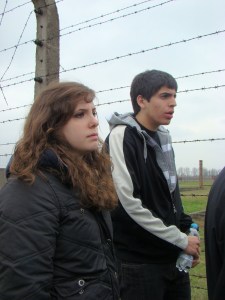 After a short break, we travelled about a mile to a place that defines modern murder in its most brutal form of the 20th century. As we crossed the bridge, we could see the labyrinth of rail tracks. Shalmi described this place as a death factory, where the only raw materials were human beings. As we looked from the infamous tower, Shalmi pointed out the Terezin family camp, where in September of 1943, a transport of 6-7,000 Jews came.

These Jews were sent immediately to this family camp without going through selection. Three months later, 10,000 more Jews from Terezin came and again they were also sent to the family camp. This was an anomaly, however it gave us an understanding what influence people could have had, because the Danes had asked the Nazis where their 400 Jews would be taken and what they would be doing. The Nazis, being asked the question that no one had asked before, held off on the destruction of the Jews from Terezin, which begs to ask the question what would have happened if every nation had asked about their Jewish citizens. The day following the Red Cross visit to Terezin, all of the Jews living in the Terezin family camp were sent to the gas chambers. We listen and think about our friend Pavel Stransky, and the survivors we met in Olomouc, who are now our friends, were once here and managed to survive.

At the end of our tour at the sauna, ironically the starting point for prisoners here who were selected to work, Shalmi left us with the profound and disturbing thought: If this is true and if humanity is capable of doing this, why would any person want to start a family and have a child born into this world? How could anyone want to? . . . Why do we come here? Why do we study this history? What does it mean to say we will never forget?
Erin says:
. . .As I walked through the barracks of Auschwitz, I was overcome with emotions of sadness, anger and confusion. I was sad because of the many different items I saw in the blocks. They belonged to a person or a family and it was probably likely that these items belonged to someone who did not survive. This made me think about how so few people did anything to stop the Holocaust. How was this possible? This continued to anger me throughout the day. . .
Becca says:

. . .When I first walked into the block that contained human hair, I walked out. I could not help but cry as I pictured this being me or my family forced to have our heads shaved. When I saw the baby clothes and tiny shoes I shed more tears and thought, how could someone be so cruel toward innocent babies…

…At Birkenau Mr. Barmore stopped at a barrack and started talking about how too much power can lead to horrible things. He connected this to how the guards at Birkenau were given so much power that they would humiliate and degrade the prisoners regularly which caused some of them to commit suicide. He also said they would become so bored that they would create these games to humiliate and degrade the Jews as a source of entertainment. I thought back to elementary school when kids who were popular got bored, they would make fun of the kids who were not popular simply because they could…

Libby says:
. . .I imagined each lock of hair, belonging to a different victim. I imagined beautiful women as their hair was being shaved, and they could do nothing. I imagined Jewish Rabbis with shaved faces, looking to the ground seeing their self-defining beards. We continued seeing the objects taken from victims such as glasses, prosthetic limbs, shoes, clothes, kitchenware, babies’ clothes and brushes. . .
Kayla says:
….I tried to imagine myself in their shoes as I walked through Auschwitz. What surprised me the most was the roads. They were rocky – like concrete – but the stones weren’t finely ground; like half concrete and half jagged rocks. My shoes were thin so I could feel every rock as I stepped on them. Then in my mind I switched my five layers of clothing to thin, striped cloth pajamas, stripped of personal belongings. . .
Nathali says:
…Everywhere I went in Auschwitz I kept asking myself, “How on earth could people survive this place?” One aspect of the horror of Auschwitz wasn’t the buildings, it was the social conditions — having 1,000 people share one bathroom and one shower. Today it struck me that no one or very few children under 15 lived. All these innocent children went straight to the gas chambers, it broke my heart…
Matt Berner says:
…With the earliest wake up call of the trip, and walking in the cold and rain, I was not in the greatest mood. Yet I couldn’t help but think that the weather was perfect for our visit to Auschwitz. Walking past the barbed wire, electrified fences and through the gate, I felt immediately thrown into the experience, and viewing the mounds of hair, glasses and brushes that are being preserved was a scary realization of the number of people that had also come through this gate…
James says:
…Today we did the ‘stations’ of Auschwitz. As we walked along the train tracks, I could feel what the prisoners must have felt. I felt afraid, scared and confused. When we got to the selection area, all that went through my mind was, “Would I have lived? Or would I have been set to my death?” I was scared of what my fate might have been. I experienced all these emotions though there was no threat to my safety. I have great respect for all those who experienced Auschwitz and survived…
Victoria says:

…What really struck me was the sick way in which the inmates were used, manipulated and tortured. The inmates contributed to the construction of the camp by digging the drainage ditches. They paid for a train ticket which brought them to the place where they were murdered. In addition, I could not believe that insurance companies insured the facilities at Auschwitz against damage. This brings up the questions we discussed: “Who was responsible? Were the monstrous Nazis responsible? Or were people like us, just doing their job, such as driving the train or opening the gate, responsible?”…

Matt Bachmann says:
…I won’t be able to comprehend what I saw for a while. I’m not sure why, but I couldn’t stand to be in the blocks. I couldn’t look at the things left behind; everything that belonged to those that perished. It gave me an idea just about how many people died there in that brutal camp. This has indeed been one of the saddest days of my life…
Nick says:
…Walking into Auschwitz was like a nightmare; we’ve all heard stories but none of us are truly able to comprehend the essence of such a treacherous place. Entering Block 4 gave me a better understanding, on a very small scale, of what the victims in the Holocaust experienced. Seeing the piles of hair behind the glass made my heart drop. I noticed the feeling was unanimous; there was silence in the room and not a smile in sight. We went on to visit Birkenau where the rain and dark, cloudy sky set the perfect mood for the dreary afternoon…