Day 6 – Prague and Dinner at the Vavrecka’s

Today we spent the morning visiting four synagogues in the Jewish Quarter of Prague. An example of Gothic architecture, the Staronova synagogue, also known as the Old-New Synagogue built in 1270, is the oldest functioning synagogue in Europe. Jews worshiped here before there were Czechs, as national identities crystalized over time, long after the Diaspora. This synagogue or shul, from which we get the word “school,” was where Jews studied the Torah, the first five books of the Bible. . The shul is central in Jewish life. Jewish boys, even in the Middle Ages, began learning to read at the age of three. Because the Jews were always literate, this set them apart from the majority of society. Inside the New Synagogue, Shalmi read the Hebrew inscription on the wall: “Greater is he who says amen than he who reads.”  Here, Shalmi teaches us that the use of star of David as a Jewish symbol originated in Prague. Displayed proudly in The Old-New Synagogue is the flag that the emperor allowed the Jews to hoist. The symbol on the flag is the star of David, or Jewish star which was the family symbol of the Cohen family, a prominent family in the congregation when the Jews made the flag. The star of David became the symbol of Judaism only in the 17thcentury. The flag also displays the yellow hat, which was a derogatory symbol because the king made the Jews of Prague wear the yellow hat whenever they left the ghetto. Although it was originally meant to be disrespectful–it was the color yellow because that was a symbolic color of the plague–it later becomes a symbol of pride for the Jews, as they chose to take a negative and turn it into something positive that connected the community.
Around the millennium, Christianity was the culture and the law so that by definition the Jews, though they existed as a community before, do not belong and were considered outsiders. Jews contributed to this element in that they did not convert, yet in the 19thcentury when they tried to convert in order to assimilate, they were not welcomed. With the rise of cities in the late Middle Ages, Jews were invited by the sovereign, usually the king, to the area. The Jews paid taxes directly to the king and received the protection of the king. They were allowed to live in certain areas, called ghettos, close to the area of commerce in the city, which were closed at night from within for their own protection. Shalmi told us that Jewish existence in Europe therefore was “off-center.” He said that he could visit any city in Europe and go the the main square. Within ten minutes he would be able to locate the site of a former Jewish ghetto area in that it would be very close, but not in, the center of the city, the market square, hence ‘off-center’
Next we go to the Maisel Synagogue, a place of significance during the Holocaust, because after the Jews of Prague are sent to Theresienstadt, the Jewish Museum asked the Nazis if they could collect personal and communal artifacts of the Jewish community. During the war, the Maisel Synagogue was a warehouse where Jewish curators catalogued and stored religious artifacts from synagogues, as well as personal religious items. The Nazis even allowed five special exhibitions of the artifacts during the war. Once their task was completed, the Nazis sent the curators of the museum to Auschwitz on the last transport, and only one of them survived.

At the Pinkas Synagogue, we see the memorial to the Jews of Prague andthe surrounding towns who the Nazis murdered during the Holocaust. On the walls of the synagogue, painstakingly painted by hand are the names of 77,297 Jews of Bohemia and Moravia who were victims of the Naxis. They are organized alphabetically by town (in yellow), followed by the first and last name (in red) and the date of the last transport. Originally, followi. Upstairs, we paused at the name Otto Wolf, from Trsice.  Outside the Pinkas Synagogue is one if the most famous Jewish cemeteries in the world, made famous by the false document, “The Protocols of the Elders of Zion.” In this pamphlet used as antisemitic propaganda, it states that the rabbis supposedly conspired to take over the world at a meeting here in this cemetery.  The tombstones in the cemetery are haphazardly stacked and pressed up against one another, because there are up to twelve layers for each gravesite, so that up to twelve tombstones share one plot space.

Before World War II began, when the Nazis came into Prague in April of 1939, occupying the remainder of Czechoslovakia, they required all Jews to register. According to Nazi law, any person who had one grandparent who was Jewish was classified as a Jew. Many Czech Jews, who were highly assimilated, did not identify themselvesas Jewish, but they did register. Then one day they received a letter telling them they had been summoned, and needed to bring a suitcase. They were being sent to Theresienstadt, which we visited yesterday.
Our last synagogue in the Jewish quarter was the Spanish synagogue. This was an ornate synagogue in the Moorish style. Many Jews were apparently embarrassed by its opulence. Shalmi said some Jews felt it was less a place to pray than a place to be seen. He pointed out the massive organ which might equally be found in a large cathedral.
Standing in the Spanish synagogue, Shalmi told us the story of the Hilsner Affair, which, like the more well-known Dreyfus Affair in France, involved a Jew who was tried not once, but twice, for an offense which he did not commit but for which he was sentenced to prison for life, demonstrating the depth of antisemitism which could be found in this area in the 19thcentury. This affair was brought to the attention of a philosopher and teacher in Prague, Thomas Masaryk, who argued on behalf of Hilsner to no avail. Later, after World War I, Masaryk went to the United States to fight for the creation of a Czech nation. The biggest loser in terms of territory, from WWI was Germany. The biggest winner was the new nation of Czechoslovakia. When Masaryk returned to what would become Czechoslovakia he was hailed as a hero. He demanded a constitution in which the nation embraces the Jew. This nation would be the only liberal state. Poland, Hungary, Lithuania, all become antisemitic, fascist states. Masaryk presided over the nation during the interwar period and this is when many Jews become Czech. They had been assimilated before but this is the only nation with which they identified. Shalmi told us that in Auschwitz, before the Czech Jews died in the gas chambers, they sang the Czech national anthem. And after the war, many Czech Jews returned to Czechoslovakia, such as Pavel and his wife. Many of them chose to leave only after the communist takeover in 1949.
After lunch at a pizza restaurant, we all had a couple of hours to spend on the market square, tasting “fair food” , listening to musical acts and shopping.
Our bus picked us up at our hotel and we were taken to the home of our friends Tony and Eva Vavrecka. Eva is the daughter of Lici Wolf, who had completed her brother, Otto’s diary, after he was arrested and killed by the Nazis. Last year Tony and Eva helped us commemorate the first memorial located in the forest by the hideouts where the Wolf family lived for three years. 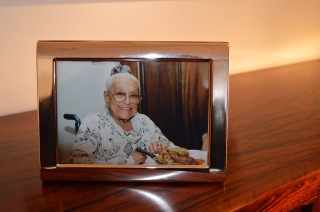 was from the students from our schools to the town of Trsice for their rescue efforts, and the Vavreckas had invited our group to dinner this year. We had drinks and hors d’ouevres at their lovely home overlooking Prague and then they hosted a dinner for us at a wonderful Italian restaurant. Their warm and gracious hospitality touched us all and we are so very grateful for their friendship. They will be joining us for the dedication of a memorial in the town itself this year. 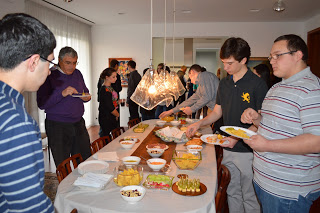 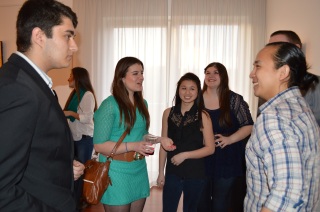 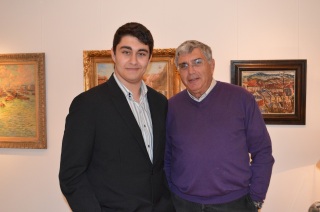 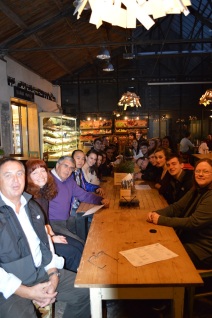