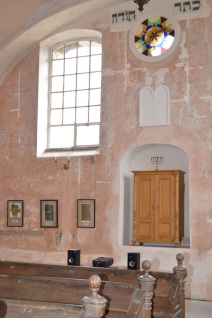 This morning we said goodbye to Prague and headed east to our next hotel stop, Olomouc. We had said goodbye to Kamilla last night after our dinner at Nebozizek overlooking Prague, and this morning we said hello to our new guide, Ilona, who will be accompanying us from Prague to Olomouc and Trsice, and will be leaving us when we get to Poland. On the way we stopped in the town of Lostice, a town of about 3,000 people, and were met by the town historian and Director of the Respect and Tolerance program in Lostice, Ludek Stipel. Mr. Stipel took us to the former Lostice synagogue and gave us the history of the Jews in Lostice, often mentioning dates and events that we had heard before from Shalmi, such as the Thirty Years War 1618-1648 and the 1848 emancipation of the Jews. We learned that the Jews of Lostice were very much assimilated into the community and he said he had been unable to find any record of any prejudice or acts of violence against the Jews, noting to the contrary, that there had been an atmosphere of cooperation between the Jewish community and the Catholics. 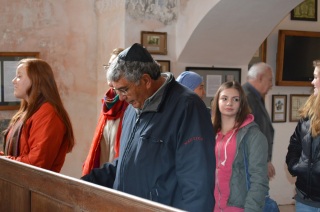 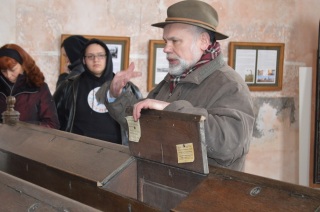 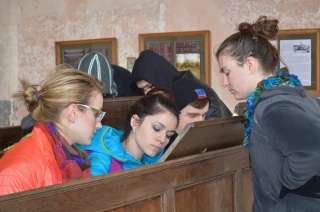 During World War II, 59 Jews from Lostice had been sent to concentration camps and after the war, only 3 returned —several members of the Hirsch family: mother, father and one daughter. The Jewish community of Lostice was not revived and the synagogue was closed and used for storage. After the parents died, the daughter Greta Hirschova moved away, and there were now no Jews in Lostice. 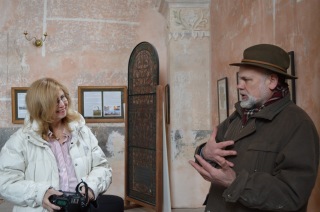 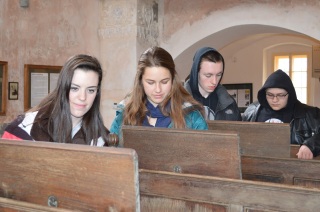 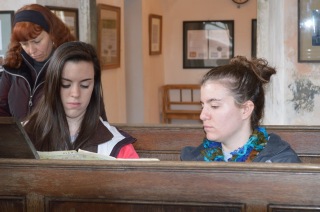 In 2006 the restoration of the synagogue by Mr. Stipel’s organization was begun and they completed it in 2011. No longer a functioning synagogue, it is now a center of learning for schools, teachers, and community members, all with the goal of preserving memory. The pews in the center are from the Olomouc synagogue, destroyed by the Nazis in 1939. Each of the 21 seas is dedicated to victims of the Holocaust from Lostice and surrounding towns. Each of the seats had a compartment dedicated to one of more families, and inside the compartment were everyday objects from the period and photos which were somehow linked to the people to whom that box was dedicated. In the box for Otto Wolf there were several items including pages from his diary, photos of his family and a spoon. We were all fascinated by these compartments and we spent some time looking through them. Mr. Stipel explained how these objects were used to teach both the history of the Jews in the area and the history of the Holocaust to children. 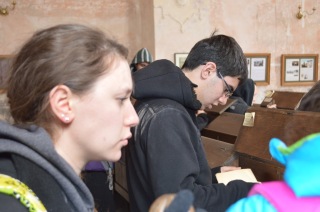 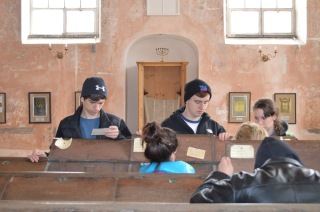 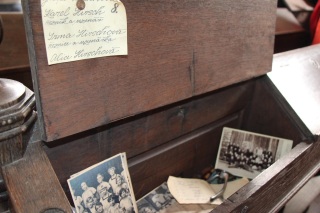 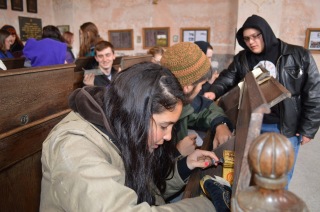 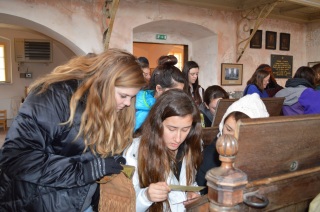 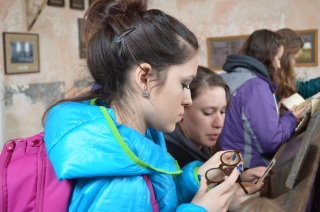 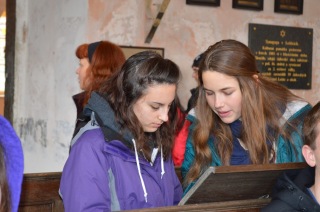 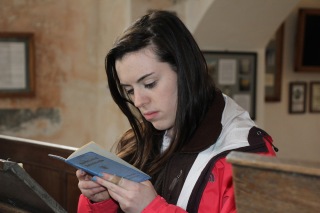 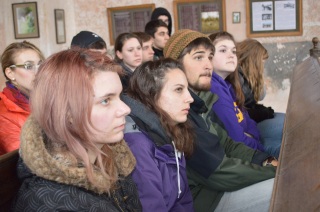 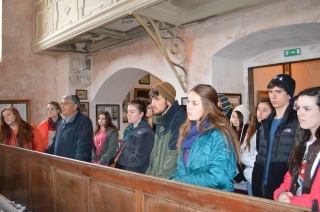 Next we were shown a section of the documentary film which the Respect and Tolerance program produced with portions of Otto Wolf’s diary read by Czech students in English. We were all extremely impressed with what Mr. Stipel had been able to establish in such a short period of time, using the most current best practices in education. 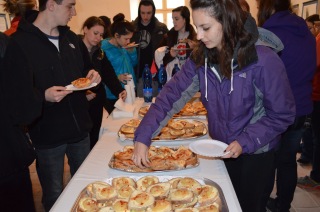 Mr. Stipel then showed us into a small reception room where the Municipal Council had prepared a small reception of drinks and cheese. Lostice is famous for its cheese called Tvaruzky, and we were touched once again by the gracious hospitality which we shown. 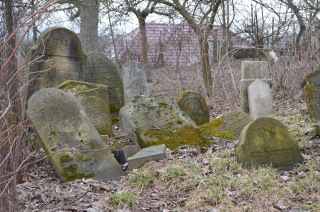 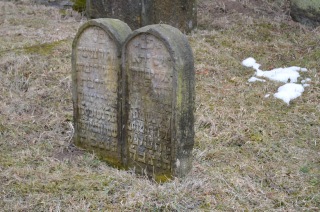 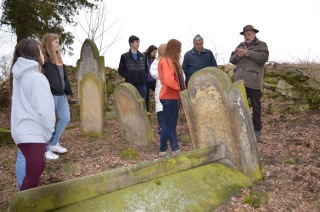 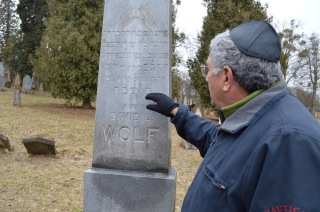 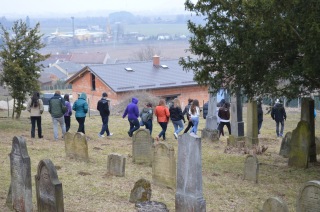 Leaving the synagogue we traveled to the Jewish cemetery which had been used since the 15thcentury until the last burial in May 1942, one month before the deportation transports left from this area. Shalmi asked us to notice how many of the Jewish headstones in the 19thcentury were written in German, which we were able to connect to the point he had made many times earlier about how the Jews were trying to assimilate and absorb German language and culture. Mr. Stipel showed us several headstones and told us stories he had learned about these individuals including the wife of a rabbi, Fanny Neuda, who had written a book in the mid-19th century, Hours of Devotion, which is believed to be the first prayer book written by a woman for Jewish women. Written in German, it has been translated dozens of times into many languages and now Mr. Stipel is working to have it translated into Czech. 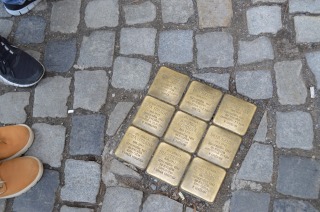 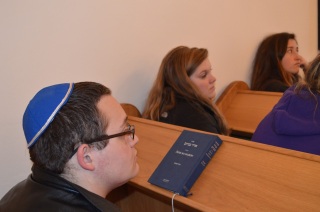 We said goodbye to our new friend, Mr. Stipel and headed on to Olomouc. After checking into our hotel rooms, our guide Ilona took us on a walking tour of the town of Olomouc, including the square, the astrological clock, the model of the town and the cathedral. At 6 o’clock we arrived at the Jewish Community Center and were met by Petr Papousek, the head of the Jewish Federation of the Czech Republic and the leader of the Olomouc Jewish community. Grandson of our dear friend, Milos Dobry, who passed away last November, Petr showed our group the small synagogue in the Jewish center, the prayer blanket which was used for Torah readings which was donated after the war by Otto Wolf’s father in memory of his sons, Kurt and Otto, and spoke to us about the slow but steady growth of the Jewish community in the area. There are currently 154 members of the Olomouc Jewish community; ½ are from Olomouc and ½ are from surrounding towns. They have a social department and a Holocaust endowment fund which allows them to take care of survivors, they have shabat services, cultural events and a monthly journal. Two years ago, we were honored to have been invited to attend their Seder service when we were here.
After his talk, we walked to the restaurant where we were met by the Vavreckas who arrived this afternoon, as well as Global Post reporter Bruce Konviser, all of whom have come for the dedication ceremonies tomorrow honoring the town of Trsice for its efforts to rescue the Wolf family. After another wonderful dinner, during which we celebrated two 18th birthdays of members of our group, we headed back to our hotel where we reflected in journaling and discussion, what we had experienced today.
Student Reflections
Helen says:
The classroom/synagogue at Lostice gave me the chance to explore and interact with objects of everyday people in the context of the Holocaust. It personalized the Holocaust and allowed unintimidating exploration of the subject; something I haven’t experienced before. This environment made me realize what is possible to keep the message of the Holocaust current and relatable for new generations.
Allie says:
At all the very old, very beautiful synagogues we’ve visited, you can tell there used to be a very vibrant Jewish community, but now, only a few are actually functioning. Most are museums and only one community here in Olomouc, has enough Jews to warrant a functioning synagogue. Even that one went from a huge, beautiful temple to a small, nondescript room in an apartment building. The absence is very present. In the towns, the streets where the Jews once walked are full once again but the synagogues remain empty.
Guage says:
Today was interesting. We awoke early and set out for Lostice. On the way we visited a synagogue that was both beautiful and plain. The reason for this is because of the damage done to it. We also saw a very old Jewish cemetery today. The view from the cemetery was perfect for one’s eternal resting place.
Kelly says:
I found it amazing that in Lostice non-Jewish people maintained the synagogue and use it to educate schools in the area about Jewish history. Their interactive way of teaching is perfect for children so they can understand a topic as difficult as the Holocaust. They accomplish this by using pictures and other items to illustrate the lives of the victims emphasizing that these people could have been anyone.