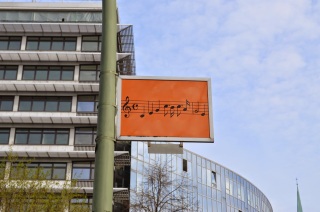 Our first stop was the Bavarian Quarter, a neighborhood of Berlin where Jews, including Albert Einstein, once lived.  Here we viewed a modern memorial constructed in 1992 which consists of signs with pictures on one side and anti-Jewish laws or rules on the other. Olaf led a discussion in how some of these laws came from the top down–such as “Jews are not allowed to travel outside Germany”– and some came from the bottom up–such as “No Jews are allowed to sing in choirs.” It is important to realize that the Nazis set some laws in place, but community members in Germany also made their own anti-Jewish rules.

An outgrowth of the Bavarian Quarter Memorial is an ongoing educational project by students in a neighborhood elementary school who research the life a German Jewish person killed during Holocaust.  The students commemorate the story of the person’s life with an engraved brick that becomes part of a wall constructed in the schoolyard. 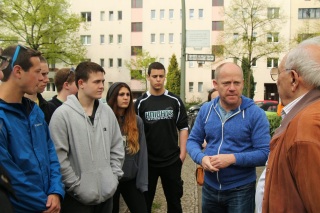 We continued our day at Grunewald Train Station, the site where many Jews of Berlin were deported to concentration camps that included Theresienstadt and Auschwitz. This memorial shows the dates of deportation, the number of Jews deported and the camp to which they were sent. This memorial was commissioned by the German Railway to address their role in the Holocaust. Students viewed this memorial, after Olaf’s explanation that the German Railroad profited greatly from the deportations because the German Jews were forced to pay for their train tickets. 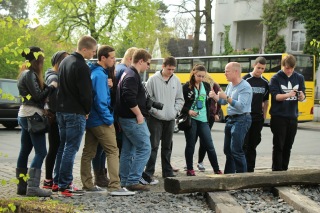 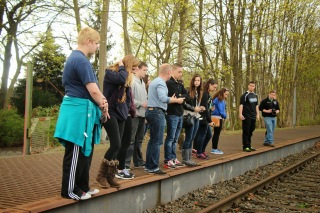 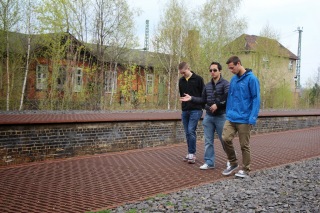 After a stop for an authentic German lunch, including schnitzel, German potato salad and cucumber salad, we went to the Wannsee House. Travelling to the Wannsee, Olaf talked about the city of West Berlin and the beautiful area of homes near Wannsee Lake.

Our guide at the Wannsee House, a young woman born in Tel Aviv, told our group about the events that led to the meeting at Wannsee, which occurred January 20, 1942. Using photographs and other primary source documents, she explained the roots of Nazi racial antisemitism and their use of propaganda to promote their fallacies that Jews were part of a separate inferior race. She pointed out photos of Jewish-Christian couples who were being paraded down German streets while holding degrading signs. She then explained that the Nuremberg  Race Laws of 1935 were not put into effect until after these photos were taken.  This fact echoes the idea Olaf explained in the Bavarian Quarter that some of these laws came from the bottom up and that these public demonstrations against so-called “mixed” relationships occurred locally before becoming official Nazi policy. After pointing out the T-4 program, also known as the murder of the handicapped, she talked about the Christopher Browning research on the role of the Einsatzgruppen.  These mobile killing squads were charged with killing Jews in the East in places like the Ukraine.  Browning investigated a particular unit of the Einsatzgruppen in which 12 of 500 men refused to follow orders to kill the Jews.  Contrary to commonly held beliefs, these men were not punished by their superiors.

The Wannsee Conference itself was made up of Nazi bureaucrats who had been given the task of figuring out how to carry out the Final Solution. Again the paradox presents itself: In this beautiful setting, with a sunny lake just outside the floor to ceiling windows, top bureaucrats of the Nazi government looked at Eichmann’s typed list of the number of Jews in countries already occupied by Germany, and the countries that Germany planned to conquer. These bureaucrats figured out the practical side of how to carry out the plan concocted by the Nazi officials.
Student Reflections of Berlin – Video Commentary