Today we headed south to visit two cities:  Rabka Zdroj and Zakopane.  There would be no rain today but the morning was overcast.  We hoped for the best.  We would not be disappointed.
Artwork by Gayle Bart HST 2014 – The Story of Rabka

As we left Krakow, Paulina told us about the ties of Pope John Paul II, now Saint John Paul, to this area.  Born Karol Wojtyla in Wadowice, near Krakow, in 1920, he grew up in an apartment building which was owned by a Jewish family.  He grew up with many Jewish friends.  He also was an avid sportsman who loved hiking and skiing in the Tetra mountains bordering Slovakia that we would see today.  He was named Archbishop of Krakow in 1964, made a cardinal in 1967, and was elected Pope in 1978.  He visited Poland during the communist era and is credited with helping to bring about the fall of communism in Poland, he was the first pope to visit the State of Israel and in 1985 he initiated the first World Youth Day.  The first World Youth Day, put on by the Catholic Church every 3 years is a one week event which draws millions of young people.  This year the WYD will again be held in Krakow and they are expecting more than two million participants.
Our first stop on today’s journey was the small town of Rabka Zdroj, often just referred to as Rabka.  We learned that many of the towns in this area also have ‘zdroj’  [meaning ‘spa]] added to their name. This area of Poland is well known for a number of spa towns and health resorts.  Rabka has been a source of fresh air for people suffering from lung ailments and allerties for more than a century.

We were here to visit a Jewish cemetery we had first visited in 2012 and again in 2014.  We trudged up the hill until we were before a convent, then took a path which led into the woods.  Before we headed into the woods, Shalmi stopped and wanted to give us the context for what we were about to see.  Before the war, there was a Jewish community here in Rabka, and although the exact numbers are unknown, they were probably about 1/3 or perhaps more of the townspeople, inasmuch as much of the health business was in the hands of Jews.  There was also a convent here; the same building but run by a different order.  During the war the Gestapo took over part of the convent and used it as a school for interrogation.  Part of the experiential learning phase necessitated that they practice on human subjects, and members of the Jewish community were to serve this function.  Their interrogation practices involved torture and ended when the subject was dead.  They then just threw the bodies out behind the convent building.  The sisters knew that they were Jewish and wanted to give them a respectful burial, but they knew nothing about the Jewish rituals for burying the dead.  They knew the Germans would not approve, and they were possibly risking their lives, so in secret, they dragged the bodies from behind the convent into the woods where they buried the corpses, one by one, trying as best they could, to provide a respectful burial. 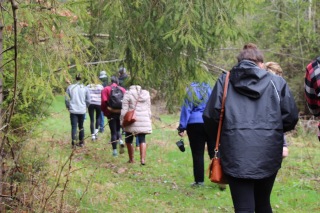 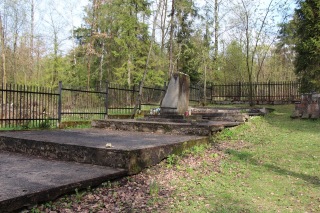 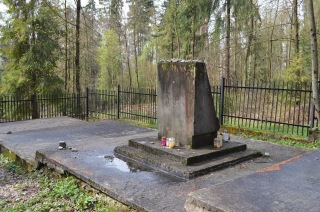 After the war, the convent never spoke of or publicized what they had done—it was a hidden cemetery.  And to some degree, it remained a hidden cemetery.  Four years ago, we had attempted to talk to the new order of sisters about the cemetery but they said they knew nothing and did not encourage us to go see it.  There was also a neighbor who watched us trek into the woods and was visibly upset with our presence.  The same had been true of our last visit here, in 2014.  But, Shalmi had said, before we entered the woods, we think the mayor is paying attention to the site. 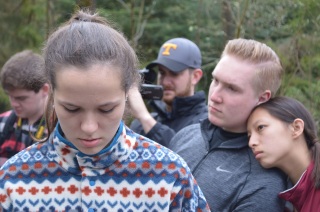 We waded through muddy sections of the unmarked, often barely distinguishable path, going around the convent building and into the woods.  And suddenly was we turned a corner, we came upon a scene which was surprising and shocking.  A theme of this trip does seem to be emerging:  that change can happen, and we can each be a part of that change.  Before us was a stone path, with a bridge constructed over the stream, with railings which led to the Jewish cemetery which was now marked by an information guidepost marker stating what had happened here.  Inside the cemetery, it was obvious much work had been done.  The weeds had been pulled, the trees and shrubs had been pruned and one could see the memorial markers and the grave sites. 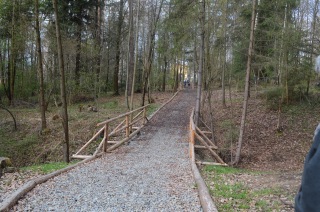 Shalmi then spoke to us about other people who didn’t have to act, but did so just because it was the right thing to do, such as these nuns.  One story that came to mind was that of the Bulgarian Jews, who numbered about 50,000.  Bulgaria had allied with Germany during WWII in the hopes of acquiring territory from Greece and Yugoslavia.  In 1943 Nazi Germany notified the Bulgarian government that the Bulgarian Jews were to be deported to Nazi-occupied southern Poland.  The patriarch of the Bulgarian Orthodox Church, Archbishop Stefan, ultimately decided to act to oppose the deportations, found out where the Jews had been rounded up and went there, to a school.  When he asked to come in, he was denied access to the Jews.  He climbed over the wall and went to the Jews, telling them not to register, but to go home.  When questioned by the authorities as to what he was doing, he asked them what theywere doing and threatened to excommunicate them if they proceeded with the deportations.  The Jews returned home.  Later King Boris, under public pressure, officially forbade the deportations.  Bulgaria’s Jews were saved and after the war about 80% emigrated to Israel.
Shalmi revisited the subject of leadership and change.  People often prefer not to take the initiative if the matter does not concern them.  But if you have a leader, who shows the way, there can be positive change.  We remembered Jan Masaryk and how as President he changed the status of Czech Jews in his country, so much so that they would sing the Czech national anthem as they walked to the gas chambers in Auschwitz.  Of course, much evil has also been done because of leadership, so it is important that people take responsibility for their actions, monitor their governments and leaders, and be willing to speak up and become involved when they know that to take action is the right thing to do.  Not for glory and praise – but because it is the right thing to do.
While we were there a family came to the cemetery and the parents and two young children walked respectfully around the cemetery as we were talking.  We had never before seen anyone in the cemetery.  We chose to take the easy path out, to see if there was a marker on the street, which there was, a signpost reading “Jewish Wartime Cemetery”.

The next stop was just for fun:  Zakopane.  As we left Rabka, the weather had turned absolutely beautiful and we had a warm and sunny day in this ski resort town in the Tetra mountains.  This was a favorite spot for Krakow Jews before the war, for skiing.  Many photos and videos we had seen in the Berlin Jewish Museum had been filmed in Zakopane.  We tried  oscype, the local smoked cheese which was delicious, marveled at the beautiful scenery and the wooden architecture for which the region is known and the wonderful floral folk costumes.  We took the funicular to the top of the mountain from where we could see the city of Zakopane below, the spectacular view of the “Sleeping Giant’, and walked along the ridge, having a photo stop as several students posed for pictures with a lamb and dog.  We had some time left for shopping in the market for gifts before heading back to Krakow.  Yesterday had been a difficult day — today was such a positive day; seeing change and celebration of actions by good people during the war, and just enjoying the food and culture of  a beautiful resort town.
Time lapse video of ride up to the mountains ! 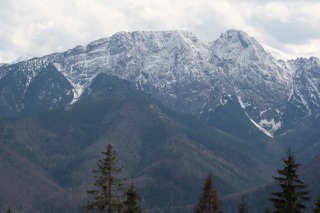 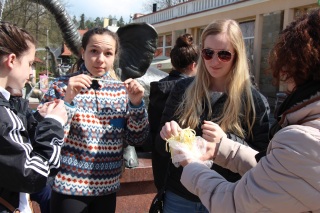 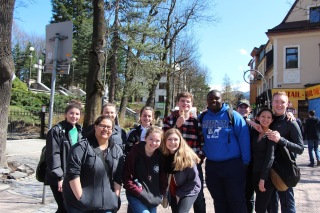 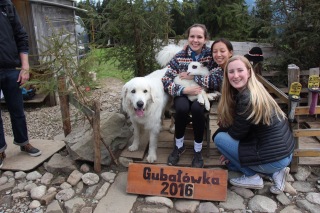 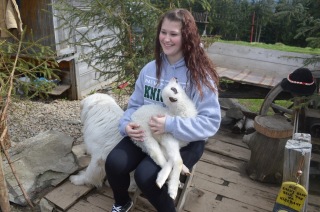 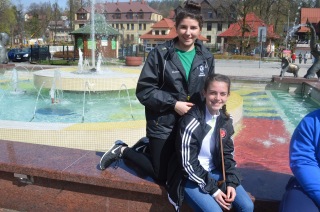 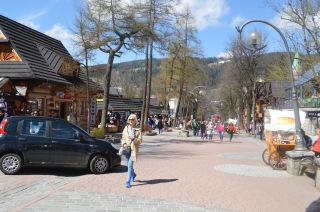 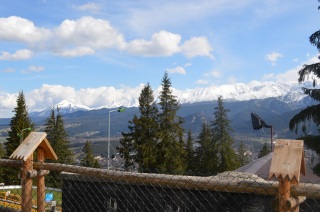