We welcome parents of this year’s Holocaust Study Tour participants, their friends and family, HST alums, our colleagues, and anyone who just happened upon our blog and is interested in our trip, as we begin our annual study of the Holocaust during two weeks in Germany, the Czech Republic and Poland.
The Mövenpick is in the Anhalter area of Berlin, in the center of the city close to the Brandenburg Gate, the Reichstag [parliament building], Potsdamer Platz  and Checkpoint Charlie where tourists and West Berliners could leave the American sector and  enter the Soviet sector to visit East Berlin. 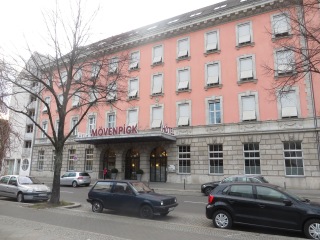 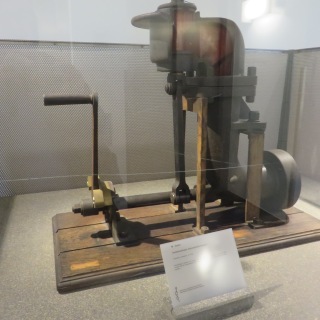 The Mövenpick Hotel is  located on Schöneberger Straße was a former industrial building built by the Siemens company in 1914 known as Siemenshaus, which Mövenpick converted  in 2003 to a wonderful hotel which mixes contemporary design with elements of the building’s industrial past.  Throughout the hotel, cases housing various machinery parts and railway items such as locomotive boilers, reference the former railway station, the Anhalter Bahnhof the remains of which are located across the street from our hotel.    Erected in 1880, it was the most important train station in Berlin to cities in the South such as Frankfurt, Munich, Prague and Rome.  In the bombing of Berlin in 1944 the train station was severely damaged.  In 1960 the city of West Berlin decided to demolish the Anhalter Bahnhof, but when the smoke cleared from the demolition, a portion of the main portal remained standing and authorities decided to spare it.
Sixteen students from three high schools, New Milford [New Jersey], and Bishop O’Dowd and Oakland School  for the Arts [California] met together for the first time this morning at our hotel.    After introducing ourselves over the incredible buffet breakfast, and meeting our Israeli historian and guide throughout the trip, Shalmi Barmore,  and Olaf, our local guide, we boarded our private bus to begin the day, which was beautiful, sunny and warm.
As we drove to our first stop, Olaf talked about the city of Berlin and how it was a relatively new, modern city.  Sixty percent of Berlin had been destroyed by Allied bombings at the end of World War II. The city was divided and West Berlin prospered and underwent a great deal of development, while the poorer East Berlin did not.  When the Berlin Wall came down in 1989 and the city was reunited, much construction was done on the former Eastern side.  He pointed out a row of cobblestones in the road which seemed to meander through the street and told us that it represented where the Wall had stood prior to 1989.  This was the first modern memorial  we saw today. 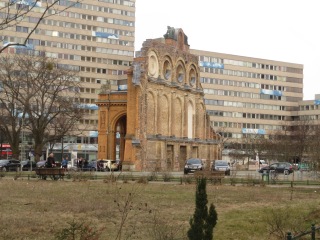 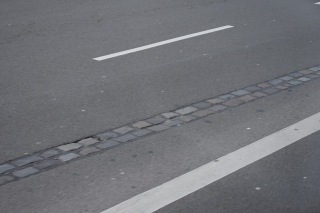 Mr. Barmore asked “What are you here to study on this trip?  Why Germany? How do we look for a reason for the Holocaust?  Is there something different in German history that could provide an explanation?”
We, therefore, began at the German historical museum where Mr. Barmore would attempt to give context to the events we would be studying. Mr. Barmore began by discussing how nations are formed or crystallized around a common history and how nationalism played a significant role in the development of Nazism.
Mr. Barmore talked about the concept of nationalism and how European nationalism differs from American nationalism.  Nationalism, we were told, is a modern concept from the 19th century when cultural national identities began to be created.  When asked ‘What is American nationalism?’ students offered concepts such as freedoms, values, equality – concepts guaranteed by the Constitution.  Mr. Barmore  agreed, saying that the American nationalism was the result of rationalism and the focus was on democracy and the rights of the individual.  In the United States, the structure and role of the government was created in the name of the people.  The purpose of the state was to guard the civil rights of the citizens and the government officials in America were considered by the people to be our civil servants. 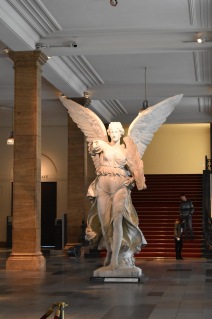 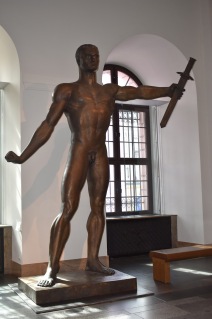 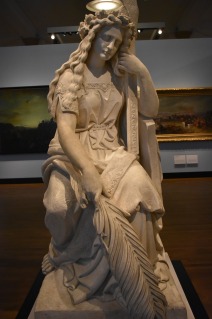 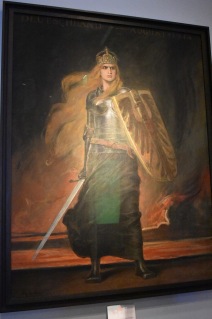 In contrast, we were told that in the European historical evolution of the context of ‘nation’, it is something greater than its people, something vague and difficult to define.  Asking German students what is ‘German nationalism’, he said, would elicit different responses, which would include history and tradition and culture, not typical responses from Americans.   “Anybody can become an American” we were told, “if they agree to uphold the Constitution and pass a test.”   For Germans, it was much more complicated.  Germany became a nation at a very special stage in history and becoming a nation was an issue of consciousness, where people began to see themselves as Germans, especially as it developed during crises, where suffering together gave people the feeling of unity.  European nationalism was also different because of the often changing borders throughout history.  Towns in what is now Western Poland had also been known by German names when they were part of Germany as towns in what is Alsace-Lorraine had also belonged to Germany at various times.  “Land is sacred,” we were told. People will fight and die for their land.”   “The Holocaust”, said Mr. Barmore, “is the extreme expression of what nationalism can lead to”
We would see three images of Germania in this museum which would help us understand German nationalism.  Germania represented Germany as Uncle Sam symbolizes the United States or Marianne represents France.  In the entry hall, standing before a large statue of Germania representing the strength and power of the German empire  we discussed how history is what we remember and how history is subject to interpretation and can be manipulated. In the 19th century Germany saw itself through the eyes of Western civilization values such as the beauty of symmetry, the white color of the statue,
At the other end of the hall another statue stood representing the Nazi belief of what it meant to be German.  The Nazis gave Germans a racial definition and claimed there were biological differences between different peoples and this Nazi racial ideology would lead to the Holocaust.  The statue represented physical strength but also creativity:  his mission was to fight for culture, language, the arts.  “The Aryan stood for cultural creativity”, Mr. Barmore said, “while the Jews stood for cultural destruction.”   As we walked through the museum we heard how German Jews believed they were Germans and they were contributing to German culture, such as through the music of Felix Mendelsohn, a converted Jew.  However,  Nazi racial ideology created an organic definition of nationalism.  Whereas Jews believed they were fully assimilated and identified themselves as Germans, many believed that Jews could not be Germans.  Mr. Barmore spoke of what happens when you have a tree and you try to graft a thorn bush to it.  It will not succeed and the tree will ultimately reject it.  “The Jews,” he said, “had such a one-sided love affair with Germany.”
At a second statue of Germania, Mr. Barmore asked how she was depicted?  “Sad” was the general sense.  Because this statue was the personification of resentment.  After all of the optimism of what Germany could become, the industrial period and modernity had created many economic divisions in society, especially from the peasants who came to be urbanized but would earn less and felt deep resentment towards the new wealthier middle class, many of whom were Jews.
A third Germania was a painting of her –  showing the anger and fire of Germany at the loss of World War I.  This loss would fuel the nationalism that would see the rise of the Nazis to power over the next decade.
After a brief lunch on our own at Potsdamer Platz, we headed to the Reichstag where we had entry passes to walk into the dome of the German parliament, and then headed back to the hotel to check into our rooms and get ready for our first dinner in Berlin. 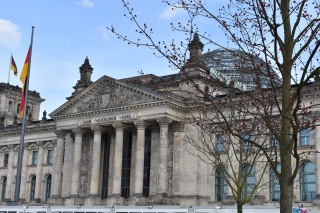 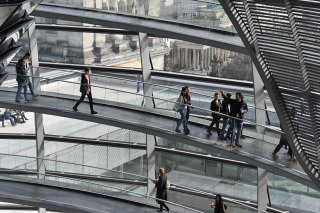 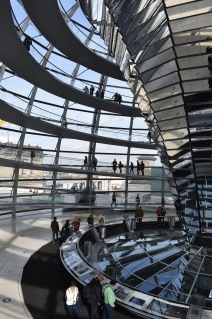 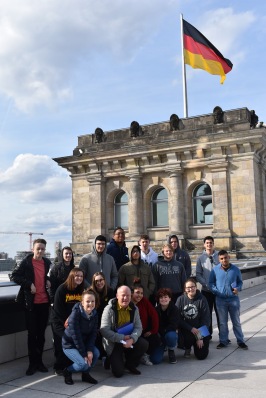 Read student comments on Padlet at the link below: