Today we had a leisurely breakfast in the hotel and then headed out with our local guide, Lidia, to have a morning walking tour of the beautiful city of Krakow , learning the history of Krakow and the Wawel Castle district.  Again, we were grateful for the mild weather which would make the walking tour much more enjoyable.  Unlike Warsaw and most other Polish cities, Krakow had not been destroyed by the German army in their war to occupy Poland, because the Nazis had decided to make Krakow their headquarters.  Most buildings in Krakow, therefore, are the original buildings.  Lidia had us walk through the beautiful park across from our hotel and pointed out prestigious Jagellonian University and the building on our hotel street where Oskar Schindler lived in an apartment while in Krakow.  Then we were off to our first stop, Wawel Castle. 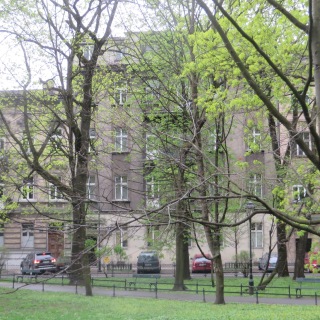 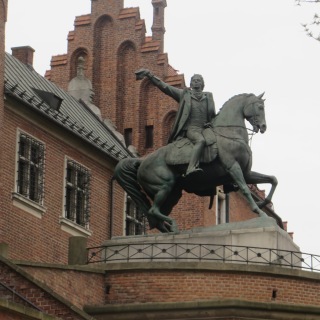 Wawel Cathedral [more formally known at the Royal Archcathedral Basilica of Saints Stanislaus and Wenceslaus] looms over the plaza.  Stanislaus is Poland’s patron saint.  Built in the mid-14th century, Wawel Cathedral is primarily gothic.  Yet each successor king wanted to add to it, using whatever was the current style, so the cathedral is a combination of many architectural styles. 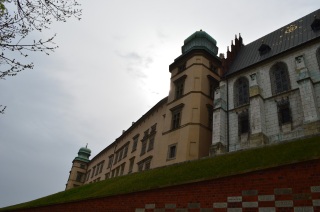 Outside the cathedral, Lidia pointed out an odd assortment of massive bones that are chained to the wall above the door.  While some claim these to be the bones of the Wawel Dragon, they are believed to be bones from a blue whale, woolly mammoth, and rhinoceros.  She told us it is believed they have magical properties, and are credited with protecting the city from destruction during centuries of Polish partition and during WWII when Krakow was not damaged, while almost every other major city in Poland was decimated.  She said that it is believed that when the bones fall, it will be the end of the world.
It is the Polish national cathedral and has been the traditional coronation site of Polish kings.   Karol Wojtyla, said his first Mass in the crypt of Wawel Cathedral on November 3, 1946.  In 1963, he took over the cathedral as Archbishop of Krakow, later becoming Pope John Paul II.  A statue of Pope John II stands outside Wawel Cathedral. Wawel Cathedral is also the burial site of the most important royal leaders of Poland. 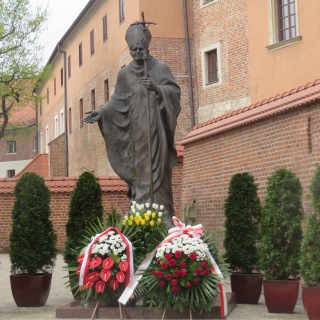 Inside Wawel Cathedral we saw some of the tombs of the greatest royal leaders, including Wladyslaw Jagiello, the  Lithuanian prince who would begin the Jagellonian Dynasty.  All of the kings’ tombs have a canopy symbolizing heaven, a carved likeness of the body of the ruler with a sword and orb, and all kings facing east as it is the symbol of the rising sun, in Christianity, resurrection.    Beginning in the 17th century, Krakow was no longer considered the capital of Poland, mostly because logistically, for travel and communication, having the capital further east, in Warsaw, was more efficient, but Krakow remained where royal leaders were coronated and buried.  It is said that Warsaw is the brain of Poland, and Krakow the heart.    We saw the tomb of King Kazimierz after whom the Jewish Quarter is named.  It was he who brought Jews here in large number and built the economy.  It is said that when he became king Poland was made of wood, and when he died, Poland was made of stone.  Lidia said that he is the only king referred to as “The Good King”.   We also saw the memorial to Saint Queen Jadwiga.
We saw the Royal Palace , home of Hans Frank, the Governor-General of occupied Poland during World War II.    The Palace is best known for its magnificent collection of elaborate tapestries that were woven in Brussels, Belgium.  Each square meter of these tapestries took one year to weave.  During the war it was known that Hitler wanted to acquire these tapestries and bring them back to Germany, so they were smuggled out of Poland and found their way to Canada where they remained until the end of the war when they were returned.  Currently the Royal Palace is undergoing major restoration so we were unable to go inside.

We saw the fire-breathing Krakow dragon at the base of the Wawel Castle wall by the Wisla [Vistula] river and learned how it came to be the symbol of the city. 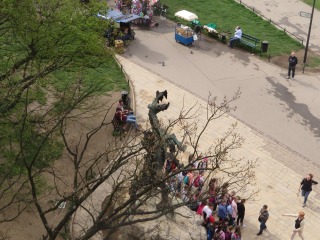 From here, we walked back towards the Market Square through what is known as Lesser Town.  As we walked along a curved street, Lidia told us that the oldest streets were curved but that as of the 1200’s all streets in Krakow were required to be straight.  She pointed out two large churches, St. Peter and Paul church from the 18th century and the gothic Church of St. Andrew from the 11th century., We walked along this street, known as the Royal Route, to the Market Square,  the largest square in Europe dating from the mid-13th century.  In the middle stands the huge Cloth Hall [so named because this is where linen was traded], which serves as the oldest shopping mall in Europe. 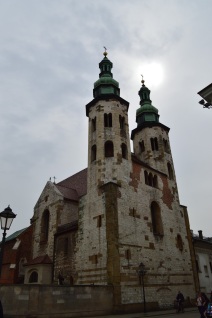 The large church on the square is St. Mary’s Basilica, which has the largest altar piece from the Middle Ages. Every hour at the top of the hour, the bugler appears at the window of the tower and plays Hejnal Mariacki, [Saint Mary’s Dawn also called the Krakow Anthem].  It is played, four times in succession in each of the four directions from the top window.  During the fourth bugle call, the bugler suddenly stops which is part of the legend that the bugler was warning the people of Krakow of an advancing invading army and calling from the four directions but during the last call an arrow from the army pierced his throat and he died.
We enjoyed a wonderful lunch in the Market Square, did some shopping for souvenirs in the Cloth Hall and the many stores around the square and then walked back to our hotel to begin to pack for our departure tomorrow and get ready for our farewell dinner this evening in the Jewish Quarter. 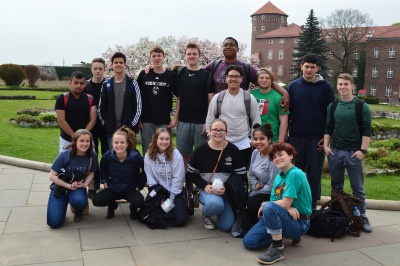