This morning we said goodbye to Prague and headed east towards our next hotel stop, Olomouc, about a three hour drive.   Kamila will be accompanying us throughout the rest of our time in the Czech Republic and will be joining us in Poland for the first time to see the final part of the Holocaust Study Tour. A few years ago, Olaf from Berlin also joined us in Poland to learn about the final week of our tour. As we mentioned before, our German, Czech and Polish guides, Olaf, Kamila and Paulina, have been with us for many years, are part of our extended family, and we find it wonderful that they all want to see the program start to finish to fully understand the total program and how their part is integral to the whole. 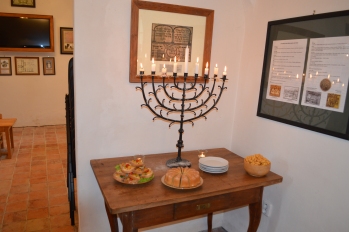 It began to rain as we left Prague and we could only hope that the rain would let up during our three hour drive. We drove through the beautiful countryside as we headed towards Loštice, our first stop, a town of about 3,000 people. Arriving in the small town, we ate lunch on the bus due to the rain and then walked to the synagogue where we were met by the town historian and Director of the Respect and Tolerance program in Loštice, Luděk Štipl. 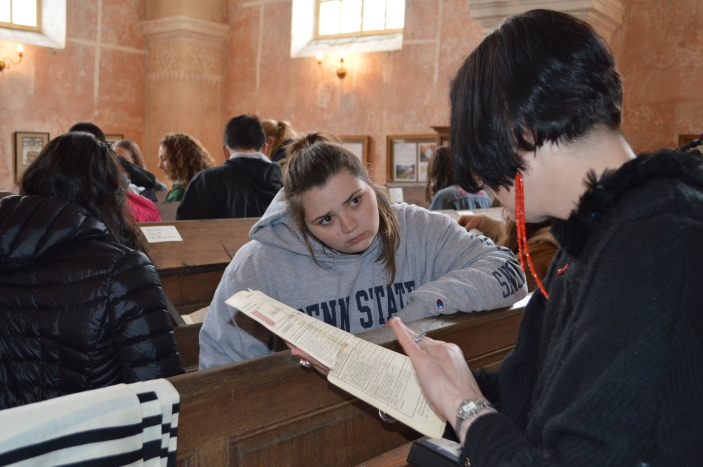 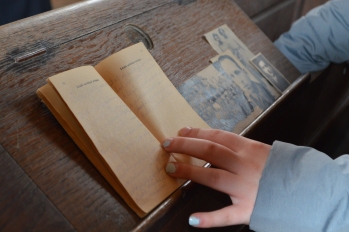 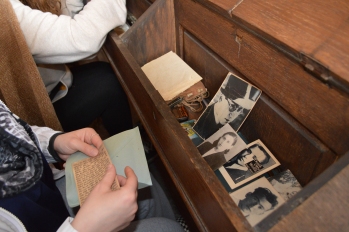 Mr. Štipl welcomed us into the restored synagogue and gave us the history of the Jews in Loštice. He told us that the first record of Jews in the area was 1554 because there was a Jewish cemetery with headstones dating to this year and that there was a synagogue which had been built in 1860. The Jews stayed peacefully in this area, we were told. We learned that the Jews of Loštice had been very much assimilated into the community and he said he had been unable to find any record of any prejudice or acts of violence against the Jews, noting to the contrary, that there had been an atmosphere of cooperation between the Jewish community and the Christians. He told us there had been one time of difficulty in 1726-1727 when Charles IV, emperor of the Austro-Hungarian empire, issued a decree that Jews could not live in proximity to a Christian church. There was a Christian church near about 20 Jewish homes. Initially the town chose to ignore the decree, but when its non-compliance was discovered by the emperor, the town was threatened. The community then thought they could close the Christian church and then build a new church near the town square, closer to the Christian homes. This was deemed not acceptable by the government, so the town devised a new plan: There were about 20 homes owned by Christians near the Jewish synagogue, so they chose to swap homes –   Christians would move to the Jewish homes and vice versa. Each owner had permission to hire an appraiser to assess the value of the homes and if there was a discrepancy in value, the owner of the home with the higher value, would receive compensation. Mr. Štipl said these appraisals were in the town’s archives.

In 1942, 59 Jews from Loštice had been sent to concentration camps and after the war, only 3 returned —several members of the Hirsch family: mother, father and one daughter.   The Jewish community of Loštice was not revived and the synagogue was closed and used for storage. After the parents died, the daughter Greta Hirschova moved away, and there have been no Jews in Loštice for decades.

In 2004 Mr. Štipl’s organization purchased the empty and decaying building and in 2006 began restoring the synagogue. They completed it in 2011. No longer a functioning synagogue, it is now a center of learning for schools, teachers, and community members, all with the goal of preserving memory. The benches in the center are from the Olomouc synagogue, destroyed by the Nazis in 1939 during Kristallnacht. Each of the 21 seats is dedicated to victims of the Holocaust from Loštice and surrounding towns.

Mr. Štipl also said that the synagogue had had about 100 stained glass windows which were lined in lead. When the synagogue was set on fire, most of the windows were destroyed. It was a miracle, we were told, that six windows survived and ended up in the possession of a local Czech man. When this man heard about Mr. Štipl’s renovation of the Loštice synagogue he approached him and tried to sell them for an outrageous amount. After much time and negotiation, Mr. Štipl was able to purchase the windows which now proudly hang in the Loštice synagogue.

Each of the seats has a compartment dedicated to one of more families, and inside the compartment are everyday objects from the period and photos which somehow link to the people to whom that box was dedicated. In the box for Otto Wolf there are several items including pages from his diary, photos of his family and a spoon. We were all fascinated by these compartments and we spent some time looking through them. Mr. Štipl explained how these objects were used to teach both the history of the Jews in the area and the history of the Holocaust to children. 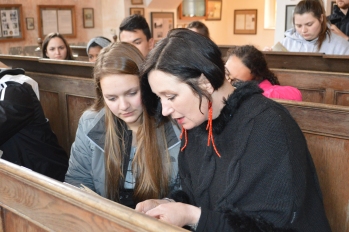 Next we were introduced to Jiři Fiser, a Holocaust survivor who lives in Olomouc.   He and his mother, 10 year old sister Vera, and his twin brother Josef, were deported to Terezin and then Auschwitz. His mother would not separate from her daughter, Vera, so they were both immediately murdered in the gas chambers. Jiři and his brother, because they were twins, became subjects of Dr. Joseph Mengele’s medical experiments. They amazingly survived the war and were liberated – they were 8 years old. Both Jiři and his brother (until his death eight years ago) often spoke to school groups about their experiences and warning about the consequences of hatred.

In the entry hall, the Municipal Council had prepared a small reception of drinks, cookies, and cheese. Loštice is famous for its cheese called Tvaruzky, [commonly called ‘smelly cheese’] and we were touched once again by the gracious hospitality we were shown by Mr. Štipl. 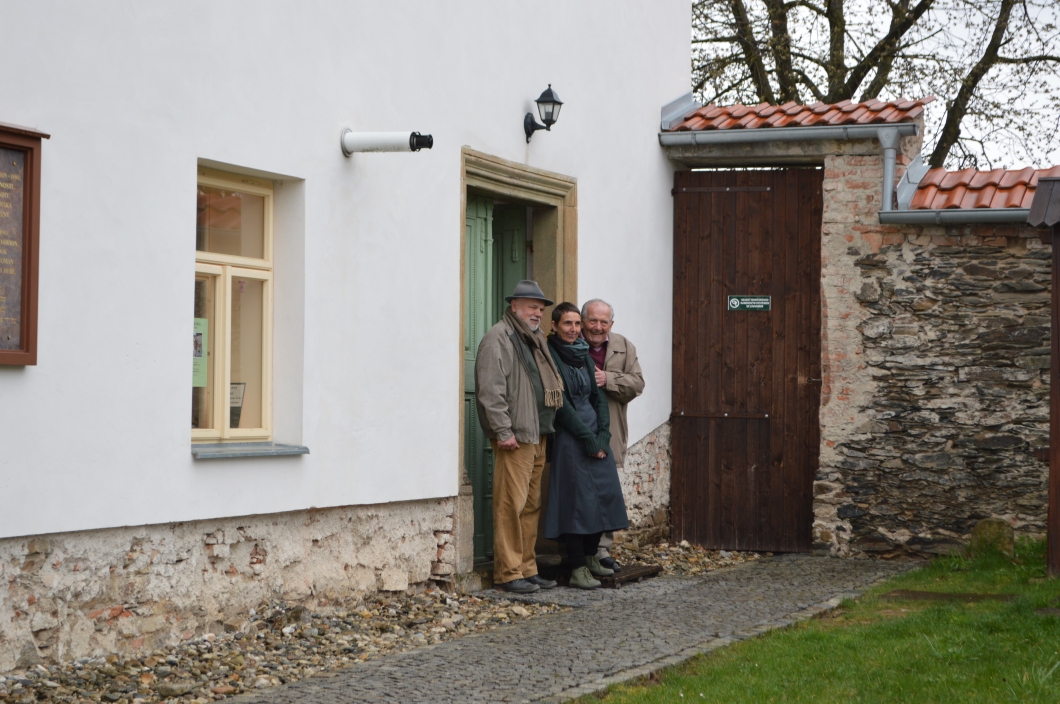 We said goodbye to Mr. Štipl and headed for our hotel in Olomouc to check in and then prepare to meet Petr Papousek, the head of the Jewish Federation of the Czech Republic and the leader of the Olomouc Jewish community . Petr is the grandson of a dear friend, Milos Dobry, who had led the Jewish community for years, and had met with our groups for years, telling us his Holocaust story, and helping us connect with the Czech community of Tršice over the years, and assisting us in establishing a memorial in the forest, marking the hiding place of the family of Otto Wolf. 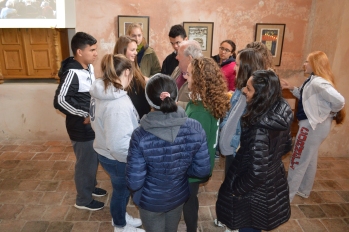 Petr talked to us about the long history of the Olomouc Jewish community and what had happened during the Holocaust. He said that on average, only 10% of Jews survived the Holocaust, whether it be in Olomouc or in the nation of Czechoslovakia.   There were about 120,000 Czech Jews: 40,000 emigrated or escaped, 80,000 remained, and of those, only about 8,000 survived. Petr told us his grandfather, Milos’, story, telling us how his grandfather always said he survived 20% because of his living conditions and 80% due to luck. He also spoke to us about a Czech play, The Good and the True, which opened on off-Broadway in New York City, and played for six weeks which intertwined the Holocaust stories and lives of two famous Czechs: rugby star, Milos Dobry and actress, Hana Pravda.

Today, the Jewish community is the third largest in the Czech Republic. Prague, the capital, has the largest with 1,500 members. Brno has 300 Jews and Olomouc has 148. When compared to the total Jewish population before WW2, the numbers are so small, but as Shalmi said, it is still amazing that this small group of people still struggles to retain its Jewish identity.

We learned about the current state of the Jewish community in Olomouc. The problem is that 60% of the membership is more than 60 years old which brings in to question the longevity of this Jewish community. They have a social department and a Holocaust endowment fund which allows them to take care of survivors. There are now 32 survivors in the Olomouc area. The Jewish community center holds shabbat services, cultural events and writes a monthly journal. In fact, Petr said the center would be busy this week preparing for next weekend’s Seder dinner at which he said there would be about 70 people.

Petr showed our group the small synagogue in the Jewish community center, as well as the prayer blanket which was used for Torah readings which was donated after the war by Otto Wolf’s father, a cantor, in memory of his sons, Kurt and Otto. He also took out the Torah scroll and showed it to us. Petr said that the Torah scroll had been written for the Olomouc synagogue in 1880 and was used until the war.   Many Jewish religious items from Olomouc were sent for safekeeping to the Maisel synagogue in Prague which we had visited yesterday. In 1964 during the communist era about 1,500 scrolls were sold to the United Kingdom which set up a charitable trust, the Memorial Scrolls Trust. The Trust numbered each Torah scrolls then lent these Czech scrolls out to Jewish communities around the world.   In 1970 the Trust had lent the Olomouc scroll to a Jewish congregation in Foster City, California [in the San Francisco Bay Area]. It became non-kosher after several years. That means that some of the letters had faded away or had been scratched so it was unfit to read from, hence ‘non-kosher’ and required repair. The Foster City congregation contacted the Memorial Scrolls Trust to arrange for a scribe to make the repairs. Around the same time the Olomouc Jewish community learned of the scroll’s existence and the Foster City congregation was asked if they would return the scroll to the Trust so it could be lent back to its home in Olomouc. They did. This was the scroll Petr was showing us. Scroll #740. 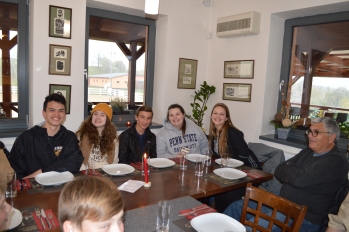 After saying goodbye to Petr we climbed back on our bus for the short trip to the Jezdecký areál Hostinúv Dúl Tršice [Hotel Horse Riding] that we call the Horse Farm where we had a wonderful dinner with the new Mayor of Tršice, Pavel Kováček, the Deputy Mayor, Mrs. Ohera, her sister and brother, and Jan Pečinka, the Czech Scout leader with several of the Boy Scouts. The Scouts who have maintained the site of the memorial our schools had erected in 2012 and have continued to meet with us each year, had once again brought some of their activity journals which chronicle their many community activities and they presented each student with a series of Boy Scout post cards. After saying good night we headed back to the hotel for a debriefing of the last two days and sharing of our most poignant and meaningful moments. 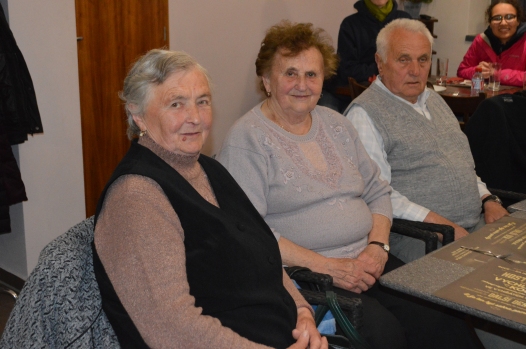