Our day began with Milan, our bus driver, taking us up to the hills overlooking the beautiful city of Prague to Prague Castle, the largest castle complex in Europe.
We started by driving through a residential – non-touristy – section of the city where Kamila pointed out a typical school, the church where the resistance fighters who had assassinated Heydrich hid and were ultimately killed, and a famous building designed by architect Frank Gehry which he called “Dancing House” and which the locals call “Fred and Ginger”. One part of the building (with the dome) is supposed to be the male and the other part with the fan skirt is the female.

As we began the ride, our local guide Kamila told us some of the history of the Czech people and the city of Prague. Empress Maria Theresa was the only female ruler of the Hapsburg empire and she and her husband had sixteen children, including one son, Emperor Joseph II, who would build, in her honor, the fortress of Terezin [became the concentration camp of Theresienstadt under the Nazis] which we will be visiting on Monday, and the youngest, Marie Antoinette, who would marry Louis XVI and be executed during the French Revolution.  She spoke to us of the independence of the new state of Czechoslovakia following the breakup of the German Empire and the Austro-Hungarian Empire and how, under Jan Masaryk, Czechoslovakia had the eighth largest economy in the world 1918-1938.  Kamila talked of the Munich Conference in which the Allies dismembered Czechoslovakia in what would later be called a policy of appeasement by the Allies, giving Hitler the Sudetenland, while not inviting Czechoslovakia to be present at this conference.  Kamila said Czechs refer to this as “Politics about us without us!”
Kamila also told us a little about the geographical layout of the city as well as some of the demographics.  The capital city of the Czech Republic has a little more than one million residents, and is called Praha, which means ‘threshhold’ because as she told us, one never knows when they are crossing the threshold from history to mythology in this city.  We were to learn that from several of the stories we would hear throughout the day.
We started at the Strahov Monastery manned by Norbertine friars who came to Prague in the 12th century from France, selling their services as bibliophiles (librarians) and scribes (copiers of books).  Strahov means “guard”  and the beautiful Strahov Monastery, overlooking the city of Prague, was the spiritual and physical guard of the city and castle.   A special VIP tour had been arranged for us by Dana our iextraordinary travel agent in Europe and good friend,  and we were able to physically enter the two beautiful halls of their library, one for theological works and one for philosophical works.  The library contains over 45,000 volumes of working dating back to the 10th century. 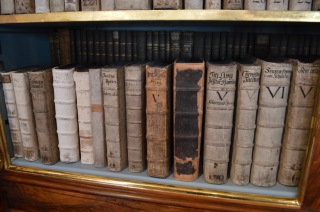 The church institutions were the depositories and guardians of much of the European culture.  In the Hall of Theology, which held 20,000 books stacked two deep, we learned how the friars would determine whether a book was acceptable to the church or needed to be archived as a forbidden book because of the content, which was anything which challenged the teachings of the Church, such as Copernicus and Galileo’s theories.  Kamila also impressed upon us the value of a single book to people in this time period by showing us a statue in one of the halls.  The man is carrying his book around in a pouch, because having a book was like having a diamond, she said, and one did not leave it behind.
Kamila also showed us one of Mr. Barmore’s favorite pieces of furniture:  a book wheel.  Researchers could open a book and be reading one text and then need to reference a different passage from another book, so put that book on the wheel, until they needed to refer to yet another passage from an additional book which could be opened and placed on the wheel, etc.  In this way, the researcher could turn the wheel and read different relevant passages.  This was a precursor of what we would call in our digital age, hypertext, whereby we are linked in one document to an additional document which can add additional information or clarify something in the original document. 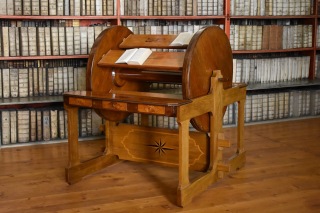 Mr. Barmore talked about how libraries save people’s knowledge and their civilization.  European civilization was Christian versus Jewish in this era.  Who wrote these books?  Priests, who were literate, and as a result, the education of the people was done through “vision”.  Take a religious painting in the ceiling of the Hall and the priest would bring the people in and explain it and relate it to the people’s lives.  Jewish civilization shies away from vision.  In Judaism  [and this is also true of Islam] one cannot create religious statues or icons.  Judaism is about the law.  Jews don’t ask about “Do you believe in God”?” or “Do you love God?”.  The law comes from the Torah, the commandments.  Judaism doesn’t want you to love God but to fear God and live according to his laws.  And what do you do when laws need to be interpreted in light of changing society? This was the role of the Talmud.  So Jewish life is about learning the law with all its interpretations. Judaism is about a book – learning it, interpreting it and living with it.  And this means that forever –  Jews, at least Jewish males –  from the age of 3, are taught to read.  This would greatly impact their existence.
In the Hall of the Philosophers, which held 48,000 books, Kamila explained the beautiful paintings which adorned the ceilings and showed us the hidden staircases to the second floor.  There was also a piece of furniture created in the 1780’s which was three pieces in one.  Part of the table would pull out to reveal a chair and the top of the table could be opened to create a ladder.  So one could open the table, use the table ladder to select a book, then close it and pull out the chair to read.
Mr. Barmore asked if we could connect this room to something we had seen in Berlin.  The book-burning memorial came to our minds with the rows of empty bookshelves.  A new regime comes in and fights some of the ideas which challenge its Nazi racial ideology and books it finds subversive.
From the top of Castle Hill we had wonderful panoramic views of the city of Prague and nice spring weather to enjoy the walk down the hill into the Lesser Town. During our walk we were able to see the Schwarzenberg Palace, the Archbishop’s Palace and the Sternberk Palace.  We visited the former Royal Palace dating from the 12th century where Mr. Barmore told us the story of how horse manure and an event in this building called defenestration, led to the disastrous Thirty Years War in Europe.  Continuing down towards Lesser Town, we walked through the Golden Lane, which students felt looked like something from Harry Potter stories and marveled at how short the doors were at the time. 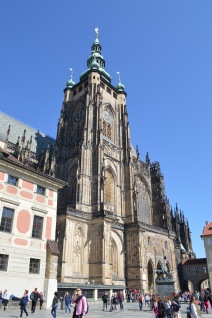 Arriving in Lesser Town, we changed currency into Czech crowns [Czech Republic is party of EU but not part of the single currency, the Euro] and then ate lunch at Pizza Calzone, before continuing our walk.  We stopped at the John Lennon Wall which is a memorial to freedom of expression in Prague.  Kamila told us how under Communism, people would write messages on the wall in violation of the law, and then the government would constantly be painting over the graffiti.  Yet in no time, new statements and art appeared, and this wall continues to represent free speech.  We also saw the site where people in love have attached locks to the bridge as in many other cities.   Again, our travel agent Dana had a surprise for us.  A driver had brought cans of spray paint for us to leave our own message on the wall and for the next half hour students became street artists! 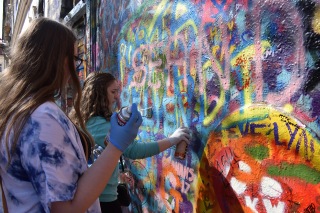 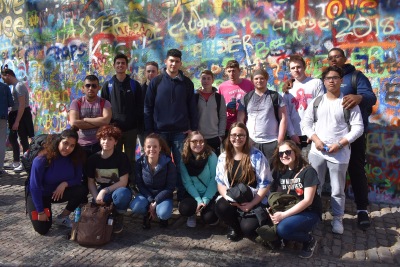 Kamila showed us the memorial by the Charles Bridge to the firefighters of 9/11 in New York.

We then climbed the stairs from Lesser Town to the Charles Bridge which connects the two sides of Prague: Castle District / Lesser Town and   Old Town / New Town / Jewish Quarter.  Walking over the bridge provided us with incredible views of this beautiful city and Kamila told us several stories connected with the statues and the bridge.   She told us the story of King Wenceslas, whose wife had bared her soul to the Confessor.  When asked what his wife had said to him, the Confessor refused to betray the sanctity of the confession, so he was taken to the Charles Bridge, his tongue was cut out and he was thrown to his death from the bridge.  500 years later, the tongue was found in the river, Kamila said, and it is now buried in a huge silver statue in the Cathedral.  The site where the Confessor was thrown from the bridge also has a statue and people make a wish, rub the statue, and their wish will come true – but they cannot reveal the wish! .  Remember the meaning of Praha – threshold between myth and reality. 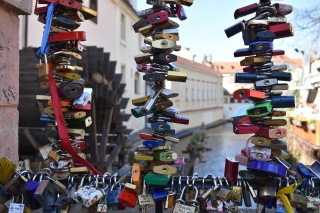 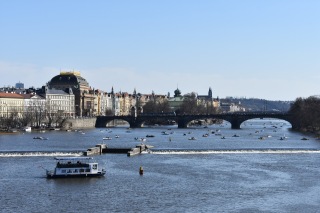 We stopped in the Market Square for a short while where we could purchase some souvenirs, before heading back to the hotel to get ready for dinner which would be with in the Market Square at U Prince Restaurant.
Read student comments on Padlet at the following link:
https://padlet.com/daufiero/skk9q5vcduk0