Our day began in the Jewish Quarter, Kazmierz.  Our first stop was the Stara Synagogue in the Jewish Quarter, also known as the Old Synagogue because it was built in 1407.  Inside we learned about the Jewish inner life..  Mr. Barmore pointed out the various parts of the synagogue that we were becoming familiar with, explained the difference between the menorah and the hanukkiyya,  and taught us that the Sabbath was the most holy day in the Jewish calendar.  The Sabbath represents the difference between the sacred and the secular, those two worlds in which Jews lived, and told us how the havdalah [meaning ‘differentiating’] were used to close the Sabbath.  He spoke of other Jewish holidays including Passover, Purim and Sukhot. 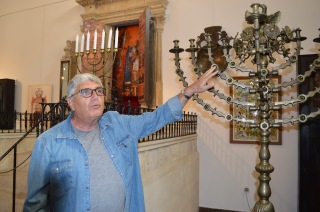 There were Polish Jews and Krakow Jews, we were informed.  The Krakow Jews were always regarded as being a little ‘snobbish’.  They tended to speak German, perhaps Hebrew, but very little Polish. This would set them apart from the larger Polish community. 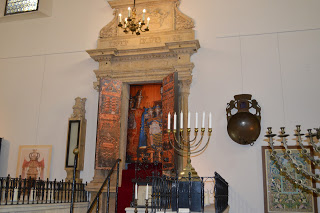 From here we crossed the square to visit the Remu Synagogue, also known as the New Synagogue because it was built in 1650, which was closed because it was Passover.  When asked why so many synagogues were still standing, Mr. Barmore said that except for Kristallnacht, no official decree to destroy synagogues and cemeteries was ever given.  They were destroyed but this was because local authorities chose to take this action.  The yellow star and the Judenrat [Jewish Council in the ghettos] were universal, but not the destruction of synagogues.  Mr. Barmore noted that the Nazis misused synagogues but did not destroy them as they could be of use to them, such as warehouses, as many were. 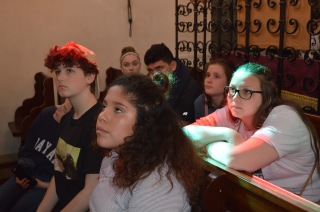 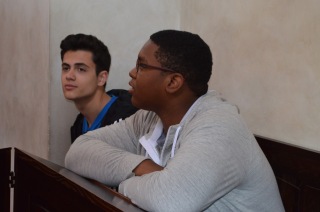 We first visited the Jewish cemetery adjacent to the synagogue.  We had seen one other cemetery located next to the synagogue in Prague (the Pinkhas Synagogue) and Mr. Barmore reminded us that this was unusual.  Jews would never place a cemetery close to the synagogue unless there was no alternative.  However, since Christians told the Jews where they could live and where they could have land, this was the property allotted to them to bury their dead.
For the past couple of  years we have been unable to go inside the Remu Synagogue as it was undergoing extensive renovations.  This year we were able to go inside as the restoration was largely complete.  This is the only functioning synagogue in Krakow.
We next visited the Tempel Synagogue, a reform Jewish synagogue which was built in the 1860’s when Krakow was part of the Austro-Hungarian empire. The synagogue had Moorish designs on the ceiling and was quite ornate, reminiscent of the Spanish Synagogue in Prague.  It was dedicated to the Emperor Franz Joseph whom the Jews loved as he did them because in an empire with numerous ethnic conflicts, the Jews did not present any problems to his authority.  The Hasidic Jews, however, did not like this synagogue which incorporated elements of Christian churches such as the pews aligned and facing front, the mixed seating, and the fact that the day of prayer was changed to Saturday.  The Hasidic Jews said of the building, that it was not a synagogue but a temple, for Gentiles. Sermons here were given in German.   The word ‘temple’ therefore, used to describe a synagogue, was originally a pejorative word referring to non-traditional Jewish synagogues.  It stuck and became another negative term that turns into a positive one.
We passed the ‘Tall Synagogue’, now a bookstore, where the prayer hall was on the second floor.  We stopped briefly to get a sense of the Jewish ‘goose’ market where Jews would do their shopping for the Sabbath and which is now both a fruit and vegetable market as well as a flea market where one might buy “chachkies.

We then visited the Galicia museum and bookstore where a current exhibit of photographs by English photographer Chris Schwartz, depicting Jewish life in Poland were displayed.  The temporary exhibit was divided into four sections:  (1) Jewish Life in Ruins, (2) Glimpse of the Jewish Culture that once was, (3) Holocaust: Sites of Massacre and Destruction, and (4) How the Past is being remembered.  We were surprised how many of the sites depicted were of Dabrowa Tarnowska.

One picture was entitled “Polish collaboration in the hunting down and murder of the Jews.”  It was about an event in a farming village of Gniewczyna where Poles took 16 Jewish neighbors, pushed them into a house, tortured and robbed them, raped the women and then called the German policemen to murder them.  The photo notes state “atrocities such as this were relatively rare” and Mr. Barmore again noted the careful language that people are using in light of the new Polish law.  He said, “This demonstrates the complexity of history and the politics of memory.”
Another of the photos showed the Krakow Ghetto Wall. The Krakow Ghetto was a sleeping ghetto, where the Jews slept at night, and worked outside of during the day. The Jews ran this ghetto, and built the walls surrounding it in such a decorative way, showing their resilience and belief that this ghetto would be a new protected area, where they would be able to ride out the war.
We had lunch in the Jewish Quarter.  It was then that our luck changed.  Perhaps we had been gloating too much about the weather, but suddenly we had lightning, thunder and pouring rain so we had to quickly get to the bus.
From the Jewish Quarter we went to the museum that once was the pharmacy of Tadeusz Pankiewicz,  Apteka Pod Orlem (Pharmacy Under the Eagle).  We walked to the pharmacy across the open memorial to the Krakow Ghetto:   chairs, that represent the furniture that the Jews carried over the bridge into these cramped quarters, where 17,000 people crowded into 320 houses. Inside, Mr. Barmore told us the inspirational story of Polish pharmacist Tadeusz Pankiewicz whose diary documents ghetto life. 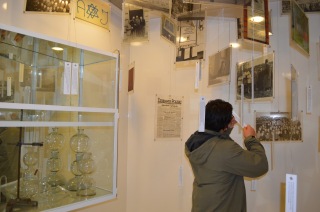 Mr. Barmore also explained the connection between this place and Plaszow Camp, located only 5 miles from here..  It was built by the people from the Krakow Ghetto who believed they would survive the war because they were building a labor camp. They even built a barrack for children there, so they believed that their families would remain intact. However, on March 13, 1943, all Jews from the ghetto were supposed to report to this square at 7:00 a.m. Once there, all children under age 14 were told to line up separately. Their parents were told that they would come to Plaszow the next day. Pankiewicz reported in his diary that some saw this as a bad sign and rushed to the pharmacy to purchase one of two drugs.  One of the drugs was Valerium–a drug that put their babies to sleep, so that parents could smuggle their babies into the Plaszow camp inside suitcases.  Mr. Barmore told us that 12 children are known to have been smuggled into Plaszow in this manner.  The second drug requested by many Jews was Cyanide, for suicide.  At 1:00 p.m., the Nazis ordered those not in the children’s line to start marching from the ghetto to Plaszow. They left behind what they were unable to carry and along the way numerous additional bundles would be discarded. The following day, their children were taken away and shot. Two days later, some parents found out when they were forced to sort the children’s clothing, and found the clothing of their own children.
Because of the rain, we were unable to visit Plaszow so we went back to the hotel to rest and prepare for dinner in the Jewish Quarter.
Read student comments on Padlet at the following link:
https://padlet.com/daufiero/aqk5rxfdcanh