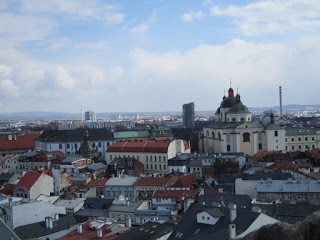 After our bus ride from Prague, we set out on a walking tour of Olomouc with our guide, Ilona.
We happened upon a beautiful Catholic church just off the square, and climbed the tower to the top. Once down, we went inside and listened to a beautiful rehearsal of organ, cello and vocalists. 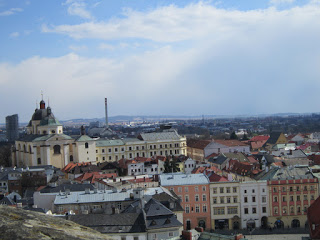 In fact, Milos Dobry is responsible for the rescuers of the Wolf family being recognized by Yad Vashem as Righteous Gentiles. Milos is also responsible for helping us locate the mayor of Trsice, who has been instrumental in the process of building the memorial at the hiding place in the woods. 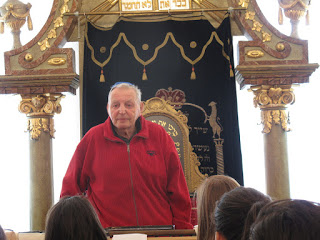 Seeing Milos meet Alexandra Zapruder, and watching them talk was inspirational. While there, a film crew from a Czech news station filmed footage for the 7 o’clock news. 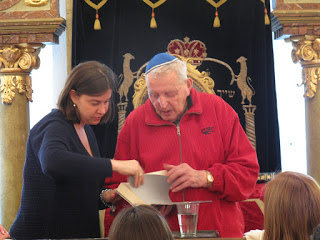 After our time at the Jewish Community Center, we were met at the hotel by Eva Garda, and her husband Tony. Eva is the niece of Otto Wolf, and daughter of Otto’s sister Lici.

How many students get to study a book in class, meet and become friends with the author, and finally travel to the place where the diary was written to dedicate a memorial to the history studied in class? We know that without Alexandra Zapruder’s book Salvaged Pages which brought us here, and that without the dedication and hard work of Milos Dobry and his grandson Petr, this would not be possible.We enjoyed a lovely dinner with our friends from Jewish community and Eva and Tony.

Tomorrow we will be going to Trsice for the dedication, where we will be joined by many Czech dignitaries, the rescuers of the Wolf family, and members of the Czech community.