Our day began at the Strahov Monastery, manned by friars who came to Prague in the 12th century from France, after they had returned from the Holy Lands and sold their services as guards, bibliophiles (librarians) and book copiers/scribes.

In the two fascinating halls of their library, one for the theological works, and the other for philosophical works, we saw an excellent example of how these church institutions were the depository and guardians of culture in Europe. This library contains over 45,000 volumes of work dating back to the 10th century.

From our view at the top of the hill,

we overlooked the spectacular view of Prague, and discussed its different units: The Castle Town, Lesser Town, New Town, and the Old Town which includes the Jewish Ghetto. All of these were in place by the 14th century, when Charles IV was the Holy Roman Emperor and Prague was the capital of the Holy Roman Empire. Next, we saw the Czernin Palace, which today houses the Foreign Ministry, and the Loretto Shrine, one of the finest baroque structures.

Continuing into the Castle premises, we saw a whole diversity of architectural styles, beginning at the St. Vitus Cathedral, with its unique gothic and neo-gothic architecture. As we walked through the king’s palace, Shalmi explained the significance of manure in world history and how defenestration was utilized to punish individuals.

We then went into the Lobkowicz Palace. The Lobkowicz family is one of the most important in Czech nobility whose estate and property were very, very extensive. They lost their property twice in recent history: once to the Nazis, and once to the Communists. 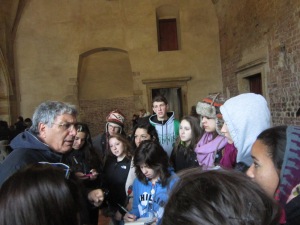 They retrieved it in 1989 after the Velvet Revolution, and recently opened it to the public as a museum. Inside we had an intimate look at the inside of palace life, and especially at the Lobkowicz’s contribution to culture: music, painting, and architecture.

After lunch, we walked through the Lesser Town, crossed the Charles Bridge into the Old City of Prague, and saw the Clementinum, the Jesuit campus. The Jesuits were called in after the 30 Years War to head the spiritual and cultural revolution initiated by the Catholic Church in what was to be the counter reformation. Their main role was in rebuilding education in order to disseminate the principles of the Church. This was the first case of a cultural revolution that caused ambivalent attitudes within Christianity. 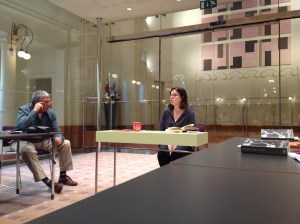 ead excerpts from Otto Wolf’s diary, and led a discussion about the role of the diary in the Wolf family. When Otto is captured and killed by the Vlasovites in April of 1944, his sister Lici took over writing the diary. She writes the last entries, ending on VE day, May 8, 1945. We are looking forward to tomorrow when we will meet Lici’s daughter, Eva, in Olomouc at the Jewish Community Center. Eva and her husband will be joining us for the dedication of the memorial to the Wolf family and their rescuers in Trsice on Monday.