Our busy day began with Holocaust survivor Pavel Stransky, our dear friend, who told us his “Holocaust Love Story.” The students were very moved not only by his story, but by his willingness to share his entire day with us at Theresienstadt.

Accomplished, prestigious Jews from Prague, Berlin and elsewhere were sent to the former garrison town of Terezin, renamed by the Nazis as Theresienstadt. Despite the crowded conditions and lack of food, these Jews, who didn’t know where they were going or how long they were going to have to “wait it out,” composed operas like Brundibar, wrote literary journals like Vedem, and painted beautiful works of art. Pavel wrote a cabaret, “why do we laugh?” along with other poetry, and in June of 2011 it was performed at Theresienstadt in a former barrack of the ghetto.

As we toured the museum, Shalmi and Pavel shared information about what we were seeing, including the propaganda film made by the Nazis after the Red Cross visit. The Nazis forced the Jews in Theresienstadt to beautify the ghetto, and even, as Alexandra

Zapruder pointed out from Alice Ehrmann’s diary in Salvaged Pages, had children sit under heat lamps so they would appear more healthy. The reason for the Red Cross visit? In what was known as “The Artists’ Affair”, five ghetto artists were able to smuggle drawings out of the ghetto which depicted the deplorable living conditions. A local art dealer was able to get them to Switzerland to the Red Cross. About the same time, when the Danish Jews were taken, their foreign minister demanded to know where they were going, and the Nazis told them they could visit them. The Red Cross came as a result of the concern of the Danish foreign minister and increasing international pressure to view conditions in the camps.

Shalmi pointed out that the Nazis, again as the dictator, are very sensitive to criticism. Therefore, they clean up of the ghetto and propaganda film, for a visit that lasted only two hours,and ended without the Red Cross going out of their way to find out what was really happening there. 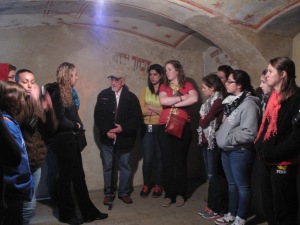 We went to the hidden Danish synagogue that until ten years ago was used as a garage to store potatoes. Inside this synagogue, Shalmi read the Hebrew prayers still visible on the walls:

“May it be your will, O God, that we return to Zion and see it once again.”

“Please God, abstain from your anger and take pity on the people you have chosen.”
“Despite everything O God, we did not forget you. Don’t forget us.”

After lunch we went to the small fortress, the concentration camp or prison, ¼ mile north of the ghetto. 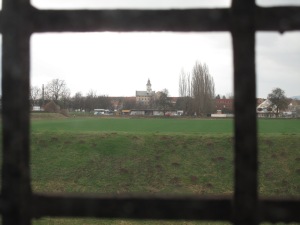 Shalmi explained that the concentration camp was intended for prisoners who could be rehabilitated to enter into society again, and weren’t intended for Jews who were a destructive element in any society and could not be rehabilitated. However, because of the need for labor, many Jews were sent to concentration camps,with the intention that they would be worked to death and not survive. This military fortress, used for hundreds of years before World War II, housed many prisoners, including the Jews of the ghetto of Theresienstadt when they were being punished. The guards of this camp, as well as others, were not only SS, buy also included prisoners, primarily criminals. Most were extremely cruel, showing that “brutality is made by human beings.” 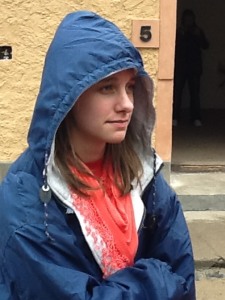 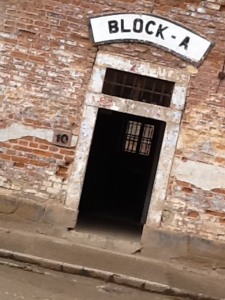 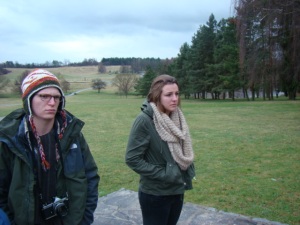 After a rainy bus ride, we entered the parking lot of Lidice Memorial site, where the Nazis razed the Czech village as a 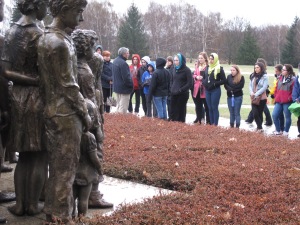 reprisal for the assassination of Reinhard Heydrich. Because of the mistaken Nazi belief that the villagers of

Lidice harbored the Czech resistance fighters who threw a grenade into Heydrich’s convertible when their machine gun malfunctioned, the Nazis made a lesson of Lidice. They shot all the men of the village, and sent the women to Ravensbruck in Germany, and most of the children were sent to Chelmno, where they were killed in the gas vans that had carbon monoxide channeled into the enclosed vans.

As we stand in the rain looking at the faces of the children in the memorial, the raindrops streak their faces, just like tears.

Once back at the hotel after dinner, Alexandra Zapruder read to us from the diaries of two children who were in Theresienstadt: Eva Ginzova and Alice Ehrmann. She spent time talking to us about how what we saw today was reflected in the words of these teenagers during the Holocaust.

Today we visited the former village of Lidice, which was decimated by the Nazis. They barged in, took the women, deported them, then gathered every man over the age of 15 and shot them. But the most horrid crime they did was the killing of 82 children that were in the town. The memorial represented them in great detail, and coupled with the rain, I broke down and cried for the first time in a while. This was the strongest of the memorials for me, emotionally.

While at Lidice, the children’s memorial hit home with me, the first child I looked at looked exactly like my brother. Tonight, Ms. Zapruder read an excerpt from Eva Ginzova’s diary where she is writing to her brother. The level of love and concern that she has for her brother reminded me of my relationship with my brother back home. I can’t imagine leaving my brother, seeing him for the last time, through bars, as Eva did.

The memorial statue of the children at Lidice was the first memorial I have seen that did not make the figures anonymous and gaunt. They showed emotions like sadness, despair and fright. Their eyes looked up at us pleading for help. The rain falling down made it appear as if they were crying.