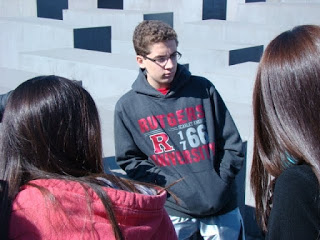 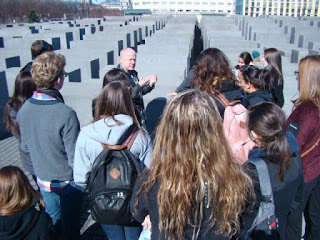 After our long overnight flight, our group of 19 students from four high schools finally met at our Berlin hotel. Our German guide, Olaf, immediately began teaching us about the beautiful city of Berlin, as we traveled by tour bus on this sunny, warm day.

After lunch at the Berlin train station, we were joined by our Israeli historian and guide, Shalmi Barmore, at the Memorial to the Murdered Jews of Europe. While there, Olaf discussed the meaning of this modern memorial in the heart of Berlin. Students spent time walking through the outdoor exhibit, and then had a lengthy discussion.
After spending some time in the museum beneath the monument, we walked across the street to the memorial in the park dedicated to the homosexual victims of the Holocaust. As seen in the pictures below, the students are looking into a structure that has a small window into projected film scenes.

The scenes inside the exhibit have changed since last year, and foster a more modern sensitivity to the issues presented.

We finished the afternoon at the museum Topography of Terror, which is built on the site of the Nazi perpetrators’ headquarters.

Here, on this same land, in the early 1930’s, the Gestapo, the SS, and the SD had their headquarters. Olaf, our German guide and friend, who was born in the former East Germany, gave us perspective when he told us that some of his ancestors were Nazis. Shalmi Barmore unpacked the name of the exhibit by analyzing the meaning of “topography.” Through viewing this exhibit, we are asked to see the three dimensionality of the perpetrators and the terror of the Holocaust. Shalmi framed the visit by asking the essential questions:

Who are these Nazi perpetrators? Are they terrorists? Are they the “other” or are they “us”? During the Eichmann trial, author and survivor Hannah Arendt commented regarding the “banality of evil.” There is a real danger in thinking that the perpetrators were evil monsters, who are so unlike us. Before going into the exhibit Shalmi encouraged us to look for the arguments that the Nazi perpetrators used to get the German people and others to go along with their plan. What was their greater cause that was so compelling?
Kristina says:
The museums today represented Berlin’s haunted past. To visualize the guilt that Germans today have felt about their people’s past was unbelievable. It was clear that all of the German people sincerely respect the victims of the Holocaust. As we walked in each memorial, you could hear a pin drop. People came from all over the world to honor those whose lives were lost during this haunted time.
Devanni says:
The first thing that stuck with me throughout the day was a playground. Olaf said a synagogue was burned to ruins, and years later a playground was built over the sacred ground. He askedus if we would let our children play there. What immediately crossed my mind was no. No, I wouldn’t let my children play there because it’s disrespectful to do such a thing on sacred grounds. Although Berlin does a good job of remembering the past, they failed on this part. They try their best to preserve the evidence of the Holocaust, but this was odd and a feeling of disgust filled me inside.
Sarah says:
All the memorials around the town serve as a constant reminder of the past. They serve as a daunting and scary truth of Berlin’s past, and they are put there to remind not only Germans, but all of us, of the horrors of the Holocaust so that we remember to never let it happen again.
Hannah S. says:
The Topography of Terror represents the other side of the Holocaust: the perpetrators’. It was scary to see Nazi men and women in the pictures having fun like normal people–not human exterminators. It really puts into perspective how possible it was for a terrible thing like the Holocaust to happen. It makes me realize that it does not take a monster to do terrible things, but ordinary people are capable of having great hatred in their hearts.
We ended our first day in Berlin with an 18th birthday celebration for Samantha!!