Last night after dinner we said goodbye to our Berlin guide, Olaf. This morning at breakfast we were greeted by our long-time Prague guide, Kamila, who came to Berlin to accompany us to Prague, and who will stay with us through our Poland part of the trip. Olaf and Kamila and our Polish guides are people we have worked with for many, many years and we consider them friends and family. Each year we return, seeing them again, is like coming home. We loaded our suitcases onto our new bus, and the students met Milan, our Czech driver, who has also been our driver for many years. 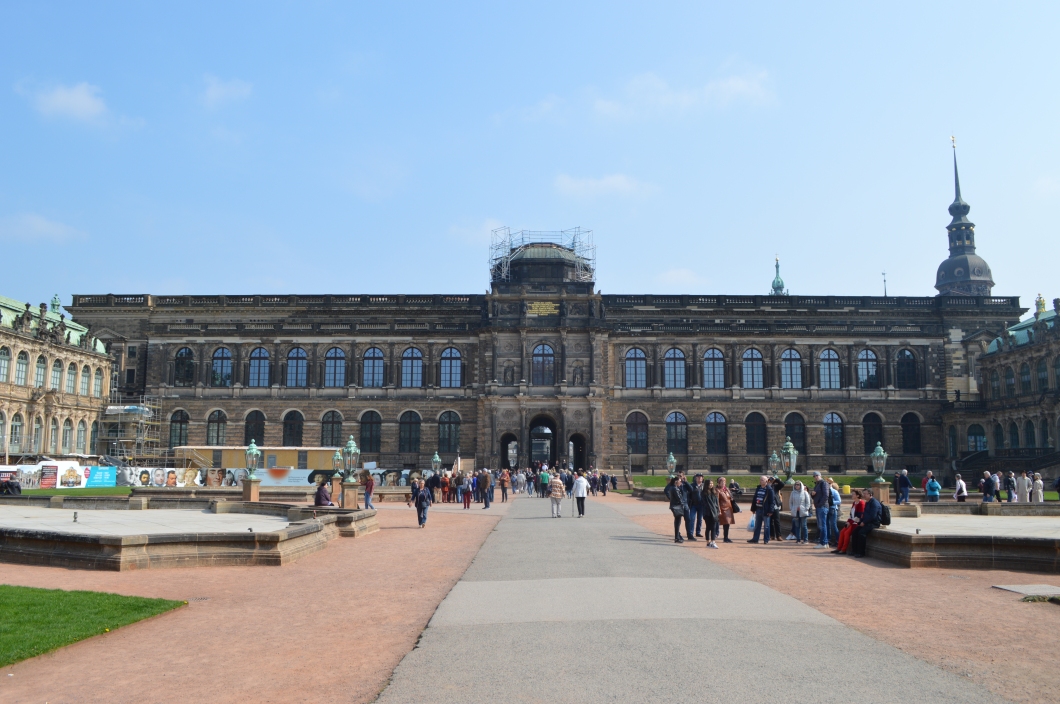 Our first stop would be Dresden in southwest Germany. 2016 was the first year we had stopped in Dresden, as in prior years we had traveled by train from Berlin to Prague, and we loved the city and decided to make this an annual visit. And so we began our two and a half hour drive to Dresden, on another sunny, if somewhat cooler day.

Dresden was a traditional medieval city, first mentioned in 1206, and was the capital of the principality of Saxonia, now the state of Saxony. Dresden has a population of about 500,000 and is famous for its Christmas market, the historic young men’s choir, Cross Choir, dating back to 1300, and is the city where the first European porcelain, Meissen, was manufactured and is still considered among the best in the world. One hundred fifty years ago before the unification of Germany, Dresden was the capital of another kingdom or principality, Saxonia, [now Saxony] which was one of 30 units or principalities that Germany would have to unite. They were never very powerful but the Saxon kings had a taste of culture and therefore Dresden became one of the most beautiful baroque towns in the world. 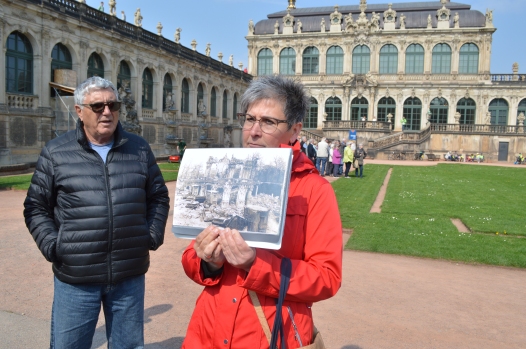 The interesting thing about the town today is that everything has been rebuilt. We learned that in February 13-15,1945, shortly before the end of the war, the Allies (Britain and the United States) bombed Dresden, reducing almost everything in the city to rubble. Why did the Allies decide to do this so late in the war when it was already apparent that Germany was eventually going to lose the war? Many Dresden residents believe that the bombing was purely an act of revenge in retaliation for the German bombing of the British city of Coventry early in the war, but Mr. Barmore also told us that it was an attempt to break the German spirit, inasmuch as the city was so symbolic to and treasured by the German population. We read a New York Times article, “From Dresden on the 50th Anniversary of ‘Slaughterhouse Five'” which talked about how the 22 year old prisoner of war, Kurt Vonnegut, captured after the Battle of the Bulge, was caught in Dresden during the bombing and then had to help in disinterring bodies from the rubble.  Twenty five years later those experiences resulted in one of the most powerful anti-war novels.  Several students had read the novel and his words helped frame their visit to Dresden today, as we would learn from tonight’s debriefing.

After the war, the city of Dresden was rebuilt as closely as possible to what had existed before the bombing, including the historic buildings. Mr. Barmore said that one of the things that is amazing about Germans is their capacity to renew and to rebuild. Germans, with the financial aid of Americans, were able to rebuild the city, much of it as it had been, and to move on. 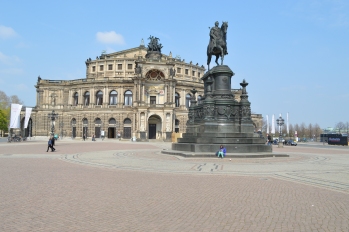 We met our guide, Cosima who said she had been born in Dresden and lived all her life here. We spent the day walking with her through the beautiful city. We had learned that Germany now has 16 states, which were unified under Bismarck in 1871, but he allowed a few states to remain ‘free’ and retain their own king. These included Bavaria [Hitler fought for Germany in WWI by successfully petitioning King Ludwig III to allow him to fight in his army] and Saxony.

Saxony became so important in the 17th and 18th centuries because it epitomized the Age of Baroque. The Baroque style of architecture was characterized by lots of ‘movement’ – many angles and decorations, but nothing really symmetrical. The baroque style was quite ‘busy’ he said. It was highly decorated both inside and outside because it was also one of the first architectural styles that used plaster and not stone so that it could be decorated. The Palace of Versailles in France became the standard against which all other buildings of this period were measured.

Cosima told us about the name Dresden, which she said meant “inhabitants on a swampy ground.” In the 19th century Dresden became industrialized. She became known for porcelain production, photo camera production, filter cigarette production, and for inventing milk chocolate.

We proceeded to walk to the Zwinger, which was a large enclosed courtyard which we were told had been built by Saxon ruler Augustus the Strong to accommodate his numerous and extravagant parties. 85% of the Zwinger had been damaged in the Allied bombing. As we stood in the courtroom the Meissen porcelain bells chimed three times for three-quarters past the hour.

Next we climbed the steps to the top of the wall which gave us an aerial view of the courtyard. Cosima said that after the war, German communists wanted to tear down the Zwinger and placed mines in the remaining walls. One Russian officer named Levidenko , loved the baroque style and insisted that the Zwinger be rebuilt rather than destroyed. This was done by primarily Dresden ladies, who raised the funds and rebuilt the buildings as the men were fighting in the war. These women became nicknamed “rubble girls’.   She said that the buildings had been rebuilt using local sandstone which contained magnesium. When this oxidized it turned the sandstone black which is why so many of the bricks and roofs were black. It had nothing to do with pollution.

As we continued walking, Cosima pointed out what appeared to be a mosque. She told us that it wasn’t, but its existence had an interesting story. A local tobacco factory owner wanted to move his factory into Dresden but there were regulations against factories in Dresden. There was, however, at the time, a fascination with Asian and Middle Eastern art and culture, so he asked if he could build a mosque and was given approval. He then moved in his tobacco factory: the minaret is a chimney, under the dome is a ‘biergarten’ and the local people call it the tobacco mosque.

We walked to Theatre Square a large square where we could view the Catholic Church of the Cross and the National Opera House as well as the beautiful Lutheran church.

We also walked through the large Church of Our Lady which had been rebuilt and was finished in 2005. The church itself was not destroyed by the bombing as the bombs bounced off the large dome, but the resulting fires outside heated the internal temperature of the church to 2700 degrees and after a couple of days the church collapsed on itself. The residents of Dresden lived with its ruins until 1992 and then they pushed for this church to be rebuilt with donations from around the world, and to be known as a church of reconciliation – open to all faiths and to be seen as a monument to tolerance and healing. Twice a day, at noon and 6 p.m. there is a devotional service but it is open to all. The gold cross on the top of the dome was donated by Britain, one of the Allied powers which had bombed the city. 48% of the stones of the church are original – they are the black stones scattered across the structure.

We ate a late lunch in a charming medieval-style restaurant, Sophienkeller. 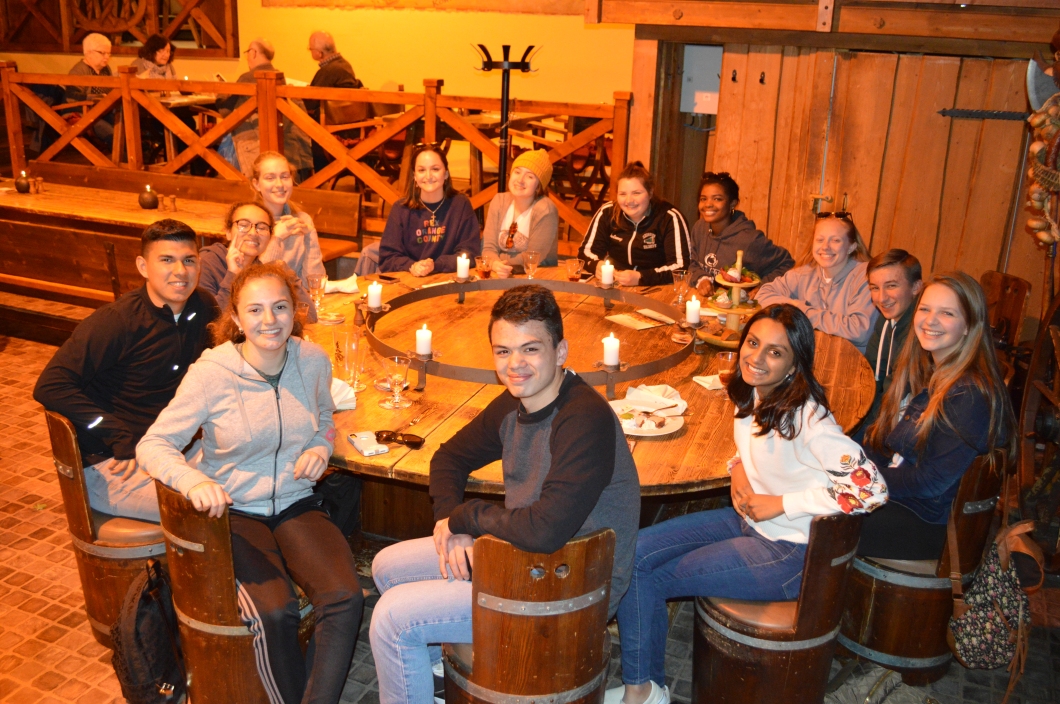 Following a brief stop for those who wished to purchase a souvenir of Germany or the town of Dresden, we said goodbye to Cosima and boarded our bus to head south to Prague in an hour and a half drive.   After we checked into our hotel, located in the center of the city, we headed off to dinner.