Our day began with a bus ride around the city of Prague, capital of the Czech Republic. Mr. Barmore began by giving us some historical foundation for what we would be seeing today. He spoke to us about historical periods in Czech history. These included the Medieval period when she was ruled by her own Czech kings, the Holy Roman Empire which we were told, was not Holy, nor Roman, nor an Empire; there was the Austro-Hungarian Empire period; the independence of Czechoslovakia following WWI until Hitler’s annexation of the Sudetenland and then complete annexation by invasion; the Communist period under Soviet domination, independence of Czechoslovakia and then the split into two nations, the Czech Republic and Slovakia. As Kamila showed us different sites in Prague, we were told to consider where that particular site fit in to Czech history; to what historical period did it belong?

Kamila noted that her grandmother, born in 1902 who had died shortly before the end of communism, has lived through 5 different regimes: the Austro-Hungarian Empire, independence of Czechoslovakia and first republic, second republic after the annexation of the Sudetenland, the Nazi occupation, and communist regime until 1989. 1 person 5 regimes. She passed away 8 months before the end of the communist era.

We had seen a city yesterday, Dresden, which had largely been leveled during WW2 by an Allied bombing. Mr. Barmore also said that in Poland, Warsaw was largely destroyed, whereas Prague was minimally damaged during the war. He said the in Poland, it was common to say that the Czechs did not fight for their freedom. We would come back to revisit this perspective later as well as consider the Czech view.

We drove through several of the ten districts of Prague. Our hotel is located in district 7. We went through several other districts as Kamila described to us the nature of each district. She noted that street names had changed 2-3 times in each generation as different regimes came to power; part of that had to do with the change of language. Prior to 1918 the primary language of the country was German; after 1918, Czech. She also pointed out that at the end of each street was a large red sign affixed to a wall which denoted the name of the street, the name of the district, and the number of the Prague district.

As we drove through more districts, Kamila told us of November 17, 1989 which Czechs call the Velvet Revolution when Czechoslovakia broke away from Soviet domination with no one being killed (hence the name ‘velvet’] and the new country leadership under Vaclev Havel, the symbol of change, and later the 1993 Velvet Divorce from Slovakia, when the two separate nations were established.

The capital city of the Czech Republic has a little more than one million residents, and is called Praha, which means ‘threshhold’ because as she told us, one never knows when they are crossing the threshold from history to mythology or legend in this city. We were to learn that from several of the stories we would hear throughout the day. 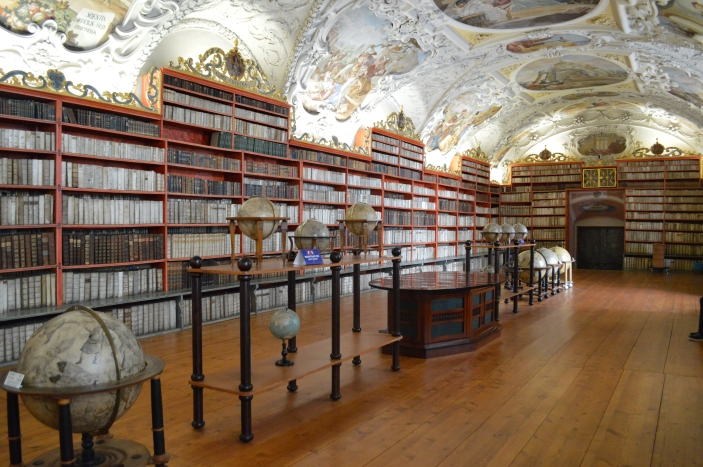 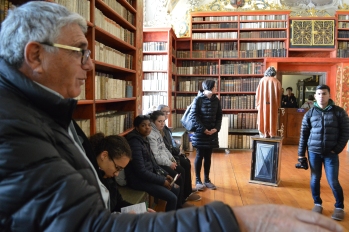 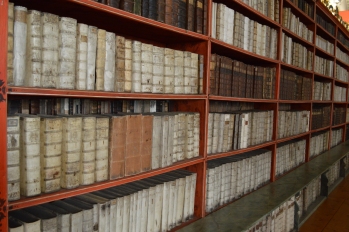 We started at the Strahov Monastery manned by Norbertine friars who came to Prague in the 12th century from France, selling their services as bibliophiles (librarians) and scribes (copies of books). Strahov means “guard” and the beautiful Strahov Monastery, overlooking the city of Prague, was the spiritual and physical guard of the city and castle.   A special tour had been arranged for us and we were able to physically enter the two beautiful halls of their library, one for theological works and one for philosophical works. The library contains over 45,000 volumes of working dating back to the 10th century, demonstrating how the church institutions were the depositories and guardians of much of the European culture. In the Hall of Theology, which held 20,000 books stacked two deep, we learned how the friars would determine whether a book was acceptable to the church or needed to be archived as a forbidden book because of the content, which was anything which challenged the teachings of the Church, such as Copernicus and Galileo’s theories. Mr. Barmore talked about how when knowledge confirms what you already believe, then it is great, but if new knowledge conflicts there is often a problem. Knowledge can be explosive and provocative because knowledge is not always comfortable.

Kamila also impressed upon us the value of a single book to people in this time period by showing us a statue in one of the halls. The man is carrying his book around in a pouch, because having a book was like having a diamond, she said, and one did not leave it behind. 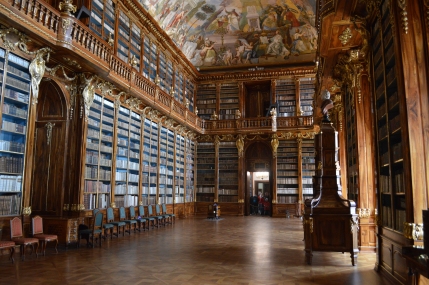 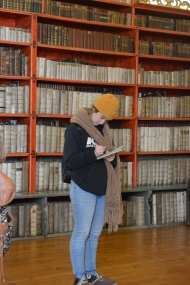 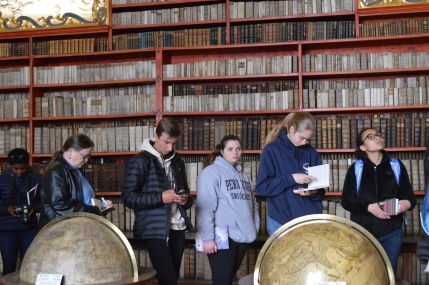 Kamila showed us one of Mr. Barmore’s favorite pieces of furniture: a book wheel. Researchers could open a book and be reading one text and then need to reference a different passage from another book, so put that book on the wheel, until they needed to refer to yet another passage from an additional book which could be opened and placed on the wheel, etc. In this way, the researcher could turn the wheel and read different relevant passages. This was a precursor of what we would call in our digital age, hypertext, whereby we are linked in one document to an additional document which can add additional information or clarify something in the original document.

Mr. Barmore asked if we could connect this room to something we had seen in Berlin. The book-burning memorial came to our minds with the rows of empty bookshelves. A new regime comes in and fights some of the ideas which challenge its Nazi racial ideology and books it finds subversive.

From the top of Castle Hill we had wonderful panoramic views of the city of Prague and nice spring weather to enjoy the walk down the hill into the Lesser Town. During our walk we were able to see the Schwarzenberg Palace, the Archbishop’s Palace and the Sternberk Palace. The Archbishop’s Palace had been built above the royal palace and it was therefore higher than the royal palace signifying the superior authority of the church over the secular ruler. 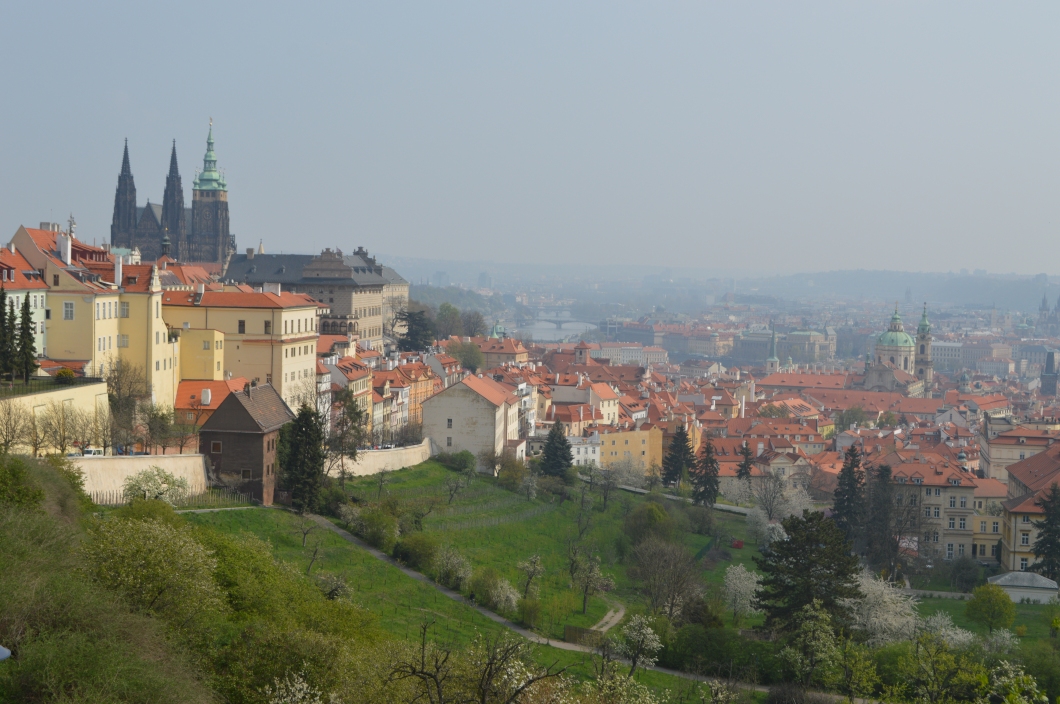 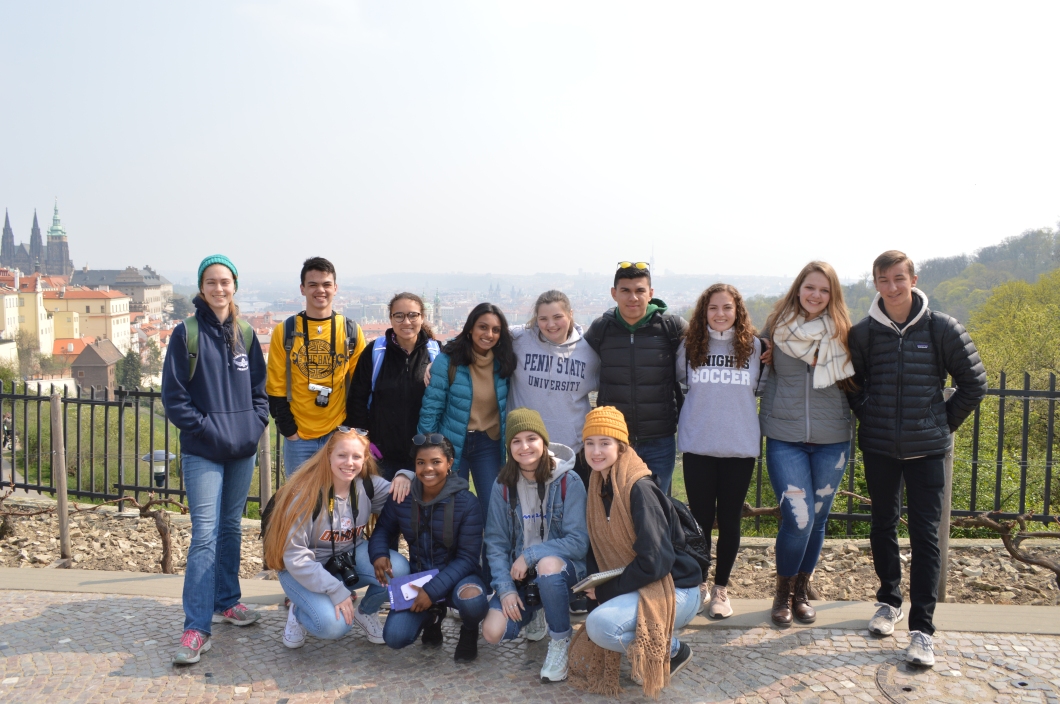 Kamilia took us into St. Vitus’ Cathedral which had taken 600 years to build and explained the architecture, the stained glass versus painted glass windows and the various stories they told, as well as several stories about events that had happened in Czech history. 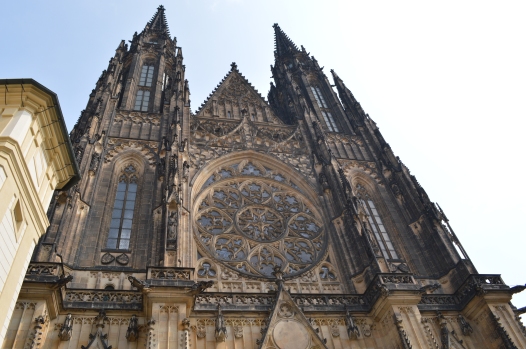 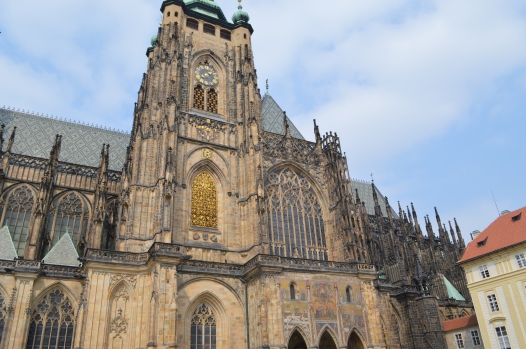 We visited the former Royal Palace dating from the 12th century where Mr. Barmore told us the story of how horse manure and an event in this building called defenestration, which led to the disastrous Thirty Years War in Europe. Continuing down towards Lesser Town, we ate lunch at Pizza Calzone, before continuing our walk. We stopped at the John Lennon Wall which is a memorial to freedom of expression in Prague. Kamila told us how under Communism, people would write messages on the wall in violation of the law, and then the government would constantly be painting over the graffiti. Yet in no time, new statements and art appeared, and this wall continues to represent free speech. We also saw the site where people in love have attached locks to the bridge as in many other cities.

Kamila showed us the memorial by the Charles Bridge to the firefighters of 9/11 in New York.

We then climbed the stairs from Lesser Town to the Charles Bridge which connects the two sides of Prague: Castle District / Lesser Town and   Old Town / New Town / Jewish Quarter. Walking over the bridge provided us with incredible views of this beautiful city and Kamila told us several stories connected with the statues and the bridge. In St. Vitus Cathedral she had shown us a painting and told us the story of King Wenceslas, whose wife had bared her soul to the Confessor. When asked what his wife had said to him, the Confessor refused to betray the sanctity of the confession, so he was taken to the Charles Bridge, his tongue was cut out and he was thrown to his death from the bridge. 400 years later, the tongue was found in the river, Kamila said, and it is now buried in the huge silver statue in the Cathedral she had shown us. The site where the Confessor was thrown from the bridge also has a statue and people make a wish, rub the statue, and their wish will come true. Remember the meaning of Praha – threshold between myth and reality. 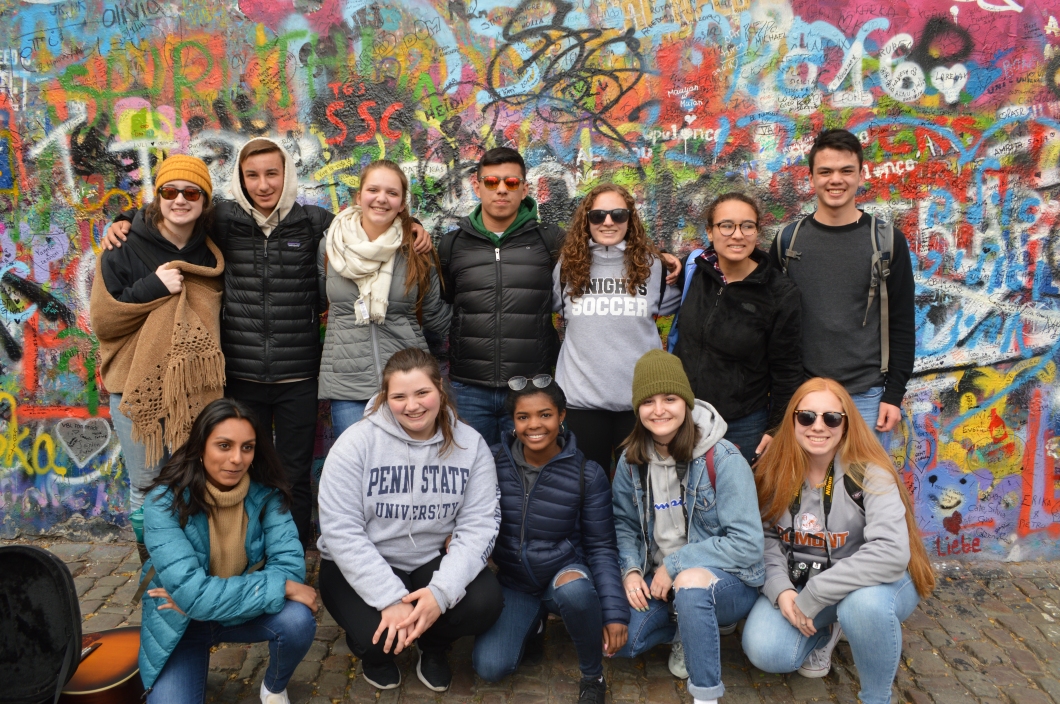