Today we continued our quest to find out more about Jewish life in the area, as well as learning about the culture of the Polish Highlanders, the mountain people of the Tatra Mountains in Zakopane. 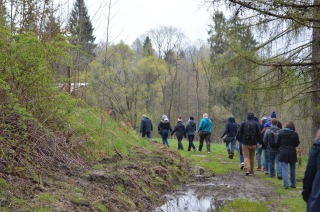 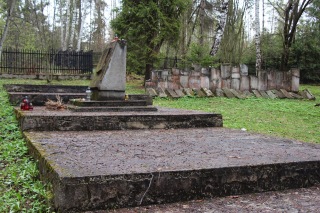 Our first stop on our journey south of Krakow was the small town of Rabka Zdroj, a spa resort town that has been a source of fresh air for people suffering from lung ailments for more than a century.  Before the war, there was a Jewish community living here in part of the city; however, during the war the Gestapo took over part of a convent and used it as a school for interrogation training.  Their practice came from torturing Jews to death, then throwing the bodies out behind the convent building. Some of the nuns here, at great personal risk, drug the bodies uphill to a remote wooded area where they buried the bodies as best as possible given the circumstances.

We walked through the damp, cold grass beside the convent, uphill through the woods on a barely distinguishable path.  Now a memorial and fence surrounds the area of burial, and a memorial marker reads: “In honor of the martyrs who dies at the hand of Hitlerites 1941-1942.” 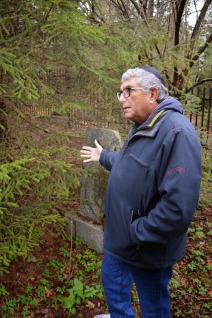 Shalmi told us that this place represents both the depths to which society can sink, evidenced by the Gestapo using Jews for torturous interrogation practice; and the heights to which society can rise, evidenced by the nuns risking their lives to properly bury the Jewish bodies.
We continue by bus up into the Tatra mountains to Zakopane, where we enjoy a delicious Polish meal and buying souvenirs from the local vendors.

On our way back to Zakopane, Shalmi told us the story of his childhood in Poland, where his father served as the Israeli ambassador to Poland.  Born in Tel Aviv in 1945, Shalmi and his family moved to Warsaw in 1954, where he lived “a privileged life” compared to most Poles.  He attended a school for diplomats with American students and here learned the English language.  The Poles struggled to make a life in Warsaw a city in ruins hidden by elaborate facades depicting painted buildings, some even with window boxes of flowers painted on them. Here is where Shalmi learned about being Jewish, something he wasn’t even cognizant of as a child in Israel.

When he was 13, he was the first person to have his Bar Mitzvah in the only remaining synagogue in Warsaw.  He assumed that no one would come because there were very few Jews here.  However, he and his family were surprised when they arrived to a synagogue packed with Jews from all over Poland who came to see the Israeli boy read from the Torah.  After reciting from the Torah, his father pushed him into the crowd, where Shalmi said people touched him and kissed their fingers, as if he were a holy object like the Torah carried throughout the synagogue for Simchat Torah. For these people who had survived the Holocaust, Shalmi represented hope and new life for the Jewish people of Poland.

Although he is not certain if this is why he became a Holocaust scholar, spending his formative years in Warsaw changed him.  We are thankful that he has been with us throughout our Holocaust Study Tour 2014.  We all hugged him when he left us this evening at our hotel, thanking him for teaching us so well.